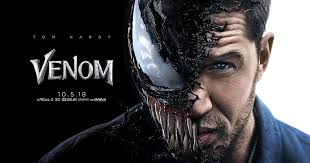 "The film could’ve changed the superhero genre but instead, added to the uproar of “superhero fatigue.”

“Venom” the Marvel super-villain and sometimes anti-hero has finally gotten his own standalone film, but it wasn’t worth the wait.

Following the mediocre “Spider-Man 3” in 2007, Marvel fans have always wanted to see a comic book-accurate interpretation of the alien monster after Topher Grace massively disappointed Venom fans with his performance. Now with Tom Hardy as the titular character Eddie Brock, fans have finally received the portrayal they’ve been waiting for. But despite Hardy’s loyalty to the source material, Eddie Brock’s motivation and subsequent trust of a vile alien parasite that eats people’s heads makes little sense.

After getting fired from his job as an investigative reporter for attempting to besmirch the career of corrupt businessman Carlton Drake (Riz Ahmed), Eddie Brock loses everything he has (his career, his fiancé, his home) over the span of a day, and becomes the stereotypical down-on-his-luck protagonist who is behind on his taxes and lives in the poor part of town. He later gets contacted by the stereotypical turncoat scientist, Dora Skirth (Jenny Slate), who informs him of all of the malevolent experiments Drake is conducting.

This whole sequence of Brock ruining his career and learning Drake’s plans takes up more than an hour of the movie with a few cutaways to random people we haven’t seen before who have been infected with an evil alien symbiote. The movie would benefit greatly if the whole first act was cut down to about 20 minutes instead of an hour as many scenes seem to drag way too long and bore audiences who came to see Venom, not Eddie Brock.

The story overall is nothing superhero fans haven’t seen before. Venom in the end, has to fight Riot, another version of himself whom he must fight to the death in an over-the-top final battle sequence prevalent in many superhero movies (“Iron Man,” “Ant-Man,” “The Incredible Hulk,” “Black Panther,” “Man of Steel”).

Tom Hardy as usual gives an excellent performance and surprisingly has great chemistry with the Venom symbiote. Brock and the Suit’s conversations with each other are some of the best aspects of the film. The scenes (although few) of Venom actually acting as Venom really redeem the some of the film’s vaults. The action when Venom is in the full black suit is utterly gruesome and astounding as he proceeds to crush people to the ground and eat their faces.

Overall, the film is utterly average which is probably worse (entertainment-wise) than being a horrible film. In the comics, Venom’s primary goal in life is to kill Spider-Man whose absence is felt drastically. If this film was taken from the perspective of an actual villainous Venom instead of being an anti-hero, the film could’ve changed the superhero genre.

Instead, “Venom” just adds to the uproar of “superhero fatigue.”