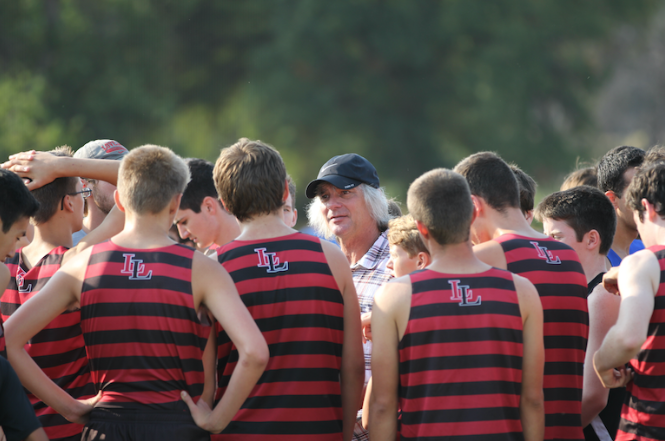 The boys team reflects on the end of a race.

For the boys, the team dominated the field by taking the top six places and earning a perfect score of 15 points. McKinney North was second with 50 points on the course muddy after recent storms.

“Our boys ran well considering the conditions of the weather and soft footing of the course,” head coach Logan Kelly said.

Junior Will Muirhead finished first overall for the boys with a time of 17:14, followed by junior Brady Laboret at 17:23, and taking third place was senior Brett Pedersen at 17:46.

“The race today went well, the girls were excited to get first and beat Mckinney North,” senior Carson Hockersmith said. “For regionals there are a lot of good teams that will be there, so for the girls it will be important to show up and compete on race day to qualify for the state meet.”

Usually, the Leopards get a chance to run their home race, the Lovejoy Fall Festival, at Myers Park each year, giving the team some extra experience on the district course. But this year’s Fall Festival was cancelled due to rain. Next up for both teams’ qualifiers will be the regional meet on Oct. 22 at Grand Prairie.

“Heading into the regional meet we are all just focusing on running fast and hoping for some decent weather,” Muirhead said.