Trick or treat on the Midway 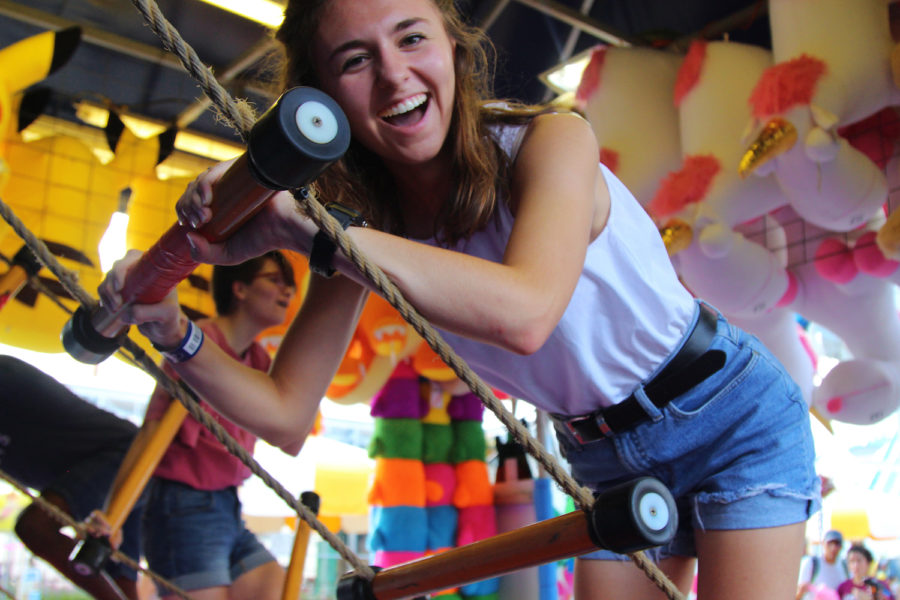 TRL's Lily Hager attempts to climb a rope ladder to win a prize.

The Midway, a long strip of carnival games and rides centrally located on the grounds, is an essential part of the State Fair experience. Lined with enormous stuffed animals and alluring prizes, the Midway is every kid’s dream. Yet, if you are a first-time fairgoer, there are some booths you should stay away from. Despite this, there are also a handful of enjoyable games that will make your fair experience that much better. Listed below are 5 games described in detail:

Tubs of fun: What looks to be the easiest ride at the fair is actually the most deceiving of them all. Before you pay, the booth worker allows you a trial. The operator successfully tosses a ball into a bucket from his position inside the tent, then hands you a ball for a practice toss and you easily make it in. Gaining confidence in your abilities, you hand over your money. They reset the game, you try again. This time the ball pops right out of the bucket. No oversized stuffed unicorn for you. Why? On your practice throw, the ball that was already in the bucket deadened the impact of the ball you threw, so it stayed in. When they removed both balls from the bucket, it became pretty much impossible for a ball to stay in the bucket without ricocheting right back out. It was all a sham and you walk away feeling like the biggest idiot in the world. -AR

Ring toss: Because this game offers you upwards of 20 rings, you automatically feel like you have a better chance to win. Unfortunately, it doesn’t matter how many rings you’re allotted, what bottle you go fo, or even how perfect your form is because this game is nearly impossible. The rings are just a hair wider than the bottle top and made of plastic that bounces off the glass. If anyone demonstrates the ring toss successfully, he or she is probably using a larger ring or dropping it from directly overhead, which is impossible from your position outside of the booth. Sadly, this classic game is a no-go. -AR

Basketball: Even for the most avid hoopers, this is one game to avoid for multiple reasons. The rims tend to be smaller and more oval-shaped, and a lot of the time the height of the basket is too high. The balls are usually over-inflated, making them bouncier. And some hoops even lack a backboard. In order to win, your shot would have to accommodate all of these conditions by having an unbelievably high arch with absolutely no room for error, among other things. This sort of shot is unorthodox and would probably get you ridiculed at the Y. –AR

Balloon “Darts”: For this game, pinpoint accuracy isn’t required. A good arm and powerful punch will pop the balloons. Instead of darts, you throw plastic-bead-filled toy balls, which push the balloon into the spike behind it, popping the balloon. The balloons on the wall aren’t blown up all the way, making the rubber thicker and harder to pop, but the chances of winning this game are higher than one may think. This game offers a fair chance at winning, unlike other Midway games, but if you want a big prize, you have to play twice to rack up five or more points. You get what you pay for with this game. -JH

Water Guns: To simplify the experience of this game, it’s the least-rigged game on the Midway and players are guaranteed a prize. The easiest way to win this game is to play it with a friend or two to get whatever prizes you would want. The catch for this method is that you have to pay double for two rounds if you want the big prizes. This game is definitely targeted towards younger fair-goers because of the easy win concept, but no game is perfect. The water spouted from the guns is released at inconsistent pressures, which makes choosing a gun like a game of roulette. If a player chooses the water gun with low pressure, then sorry bud, you’re not winning. -JH

Breaking plates: This challenging game has a lot to offer, from the pride of throwing the weighted ball fast enough to shatter a plate, to the thrill of choosing a stuffed animal. The first attempt was difficult. Calibrating to the ball and the distance between the counter and the plates takes a few misses. However, with a few more tickets, staffer and athlete Grace Nguyen broke two plates and was rewarded a small prize of her choice. This game is no giveaway, but you do feel good walking away with a prize you earned. -LH