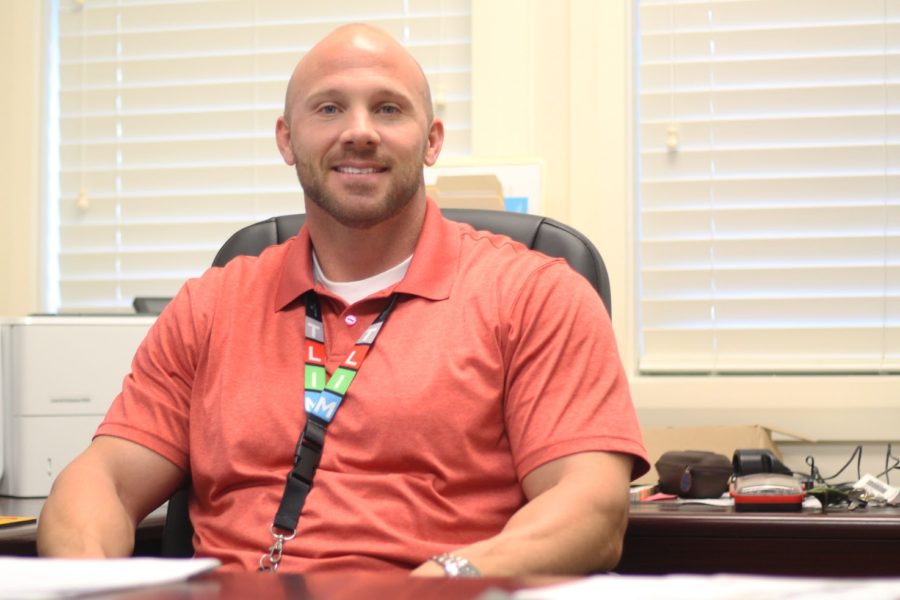 Dan Buholtz comes to the district as part of the school's steps to building safer campuses.

Dan Buholtz is the district’s first director of safety and security. Prior to working for the district, he was in the Marine Corps special forces and a lieutenant at the Collin County Sheriff’s Office. He parents two kids in the district.

The Red Ledger: Could you describe your job responsibilities as the director of safety and security?

Dan Buholtz: My responsibilities include but are not limited to the following: coordinating and supervising safety and security services, programs, and functions affecting the safety, security, and emergency preparedness of [the district].

TRL: Why did the district decide to create the new position of director of safety and security?

TRL: What is your educational background?

DB: I hold two degrees: a Bachelor of Science in Legal Studies and a Master of Business Administration.

TRL: Could you describe the jobs in security and safety you held prior to the one in the district?

DB: I am no longer affiliated with the Collin County Sheriff’s Office. However, I still hold a peace officer license. During my time in law enforcement, I quickly advanced through the ranks, becoming a patrol deputy, criminal investigator, then lieutenant and SWAT team commander. Prior to my law enforcement career, I served in high threat operations overseas [in Afghanistan, Pakistan, Central and Northern Iraq, and Kurdistan] where I protected ambassadors and other high-ranking U.S. and foreign government officials.

TRL: What motivated you to join the Marines?

DB: Growing up I always knew I wanted to be in either the Navy or Marine Corps. After deliberating, I made the decision to go into the Marine Corps and attempt Force Reconnaissance training. After enduring some of the most grueling training a human can go through, both physically and mentally, I came out of Amphibious Reconnaissance School as an honor graduate and was placed in a Force Reconnaissance platoon. I guess you could say I like a challenge!

TRL: Could you describe your experience in the Marine Corps special forces?

DB: Becoming a U.S. Marine was an honor in itself and something I will always be proud of claiming. It truly is a brotherhood that few people will ever be able to understand. Being able to advance to a level within the Marines that only a small percentage of Marines ever reach is something that became a large part of my makeup as a person.

TRL: In what ways have your past experiences in the Marines and safety and security management helped you with your work in the district?

DB: Joining the Marines at such a young age exposed me to so many different life experiences. The self-discipline, self-motivation, pride, and teamwork were a few things the Marines taught me that I still carry with me today. When I got out the Marines I continued a career that led me back overseas for many years as an instructor for high threat operations and deputy project manager that encompassed providing security details for government officials. All of these experiences combined have given me the ability to have a comprehensive understanding and clear oversight of operations to be able to implement and carry out safety and security measures for Lovejoy ISD.

TRL: How do you hope the new security improvements will help the district?

DB: The district has implemented a lot of great safety and security features throughout the district campuses. Although there is no “silver bullet” in preventing every critical incident from happening, we have been working diligently to ensure response times from first responders are reduced, highly-trained security personnel and medical bags are in place, and all campus personnel are properly trained and prepared to handle emergency situations appropriately.

TRL: What do you consider most important when securing the safety of students and faculty in the district?

DB: Awareness and communication would have to be two of the more important aspects of safety and security. It is unfortunate, but in today’s society you can never take too many precautions. Knowing and being able to detect anomalies is very important in preventing something bad from happening. Equally important is speaking out or reporting something that could be perceived as a threat–no matter how big or small.