Column: Support for the soles 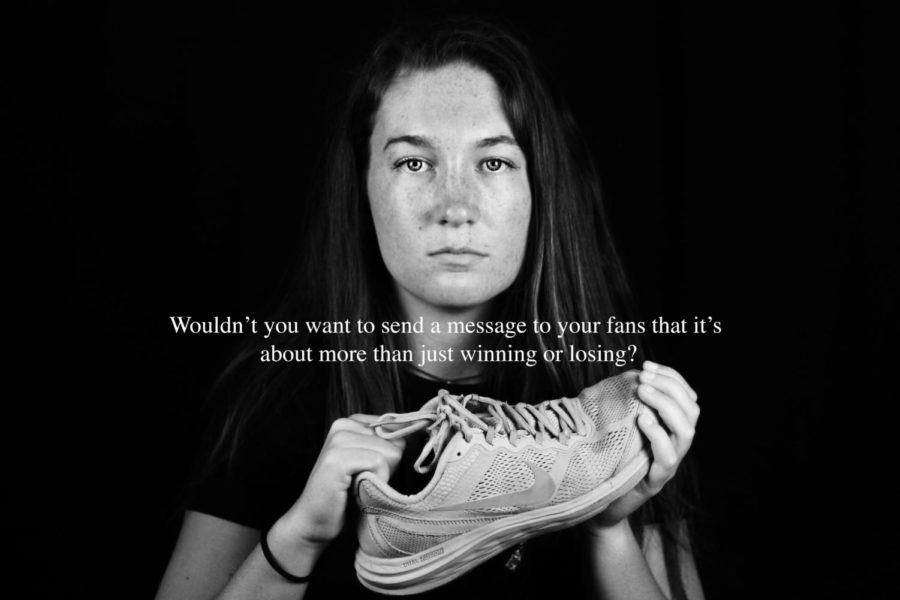 "As for me, I’ll rep my Nikes proudly, any day of the week."

A little more than two years ago, a second-string NFL quarterback made a decision. A decision so prominent that it completely shook the foundation of America to its core.

Some dubbed it un-American and disrespectful, while others said he was utilizing his First Amendment rights and should be regarded as a hero. Either way, the decision and the man behind it are continuing to make headlines across the country.

Ex-49ers quarterback Colin Kaepernick began kneeling for the national anthem on Sept. 1, 2016, although now he is without a job and in the midst of a lawsuit against the NFL for it. His intent behind the protest was to bring awareness to not only police brutality, but the oppression of minorities in general. His protest rapidly spread throughout the league, with many players kneeling, locking arms, raising fists, or remaining in the locker room during the anthem throughout the duration of the 2016 and 2017 seasons and continuing into the 2018 season.

I bring this controversial topic up for the purpose of addressing the “boycott” that is brewing against Nike, as a result of naming Colin Kaepernick as the face of their 30th anniversary “Just Do It” campaign and focus in the corporation’s newly released advertisement. A segment of the advertisement (pictured) was released a couple of days before the entirety of it ran during the NFL season opener last Thursday night.

From what I can see, the Nike boycott is less of a boycott and more of a social-media showdown, consisting of viral videos of people burning their Nike gear for all the Internet to see. I find irony in the fact that people are violently destroying apparel they’ve already paid for to bash a multi-billion dollar company, but to each their own.

Personally, I love the ad. It’s moving and inspirational and sends such a great message that preaches nonconformity. I think it was a great idea, and I believe the people at Nike knew what they were doing when they decided to run it.

I don’t know how anyone can disagree with the message they are trying to get across, but then again, I’m not entirely sure that is where the problem lies. It makes more sense that people are angry about the face of the man that lies behind the message: Colin Kaepernick.

I, for one, support Kaepernick. I believe that when given a platform like one of an NFL quarterback, it should be used accordingly. Especially when 169 unarmed people were shot and killed at the hands of police in 2016.

It wouldn’t be fair for professional athletes to be told to “shut up and dribble” as if politics are completely off guard to people like them. They have hundreds of thousands of fans who look up to them all over the world. Wouldn’t you want to send a message to your fans that’s about more than just winning or losing?

You look at athletes like LeBron James and Muhammad Ali, athletes who used their platform to speak up for what they believe in and initiate change. So while Kaepernick wasn’t a huge NFL star, he did what huge NFL stars failed to do: bring attention to an issue that desperately needs to be addressed. Although, for a while, he became one of the most hated men in America because of it.

I do not believe he was disrespecting the flag or the country. I do not believe he was disrespecting veterans or the military. Kaepernick reiterated that his intent was not to discredit the military and the men and women who fought for this country. He deliberately said he was protesting oppression of minorities in America, giving a voice to people he felt didn’t have one.

Could he have protested in a less controversial way? Maybe. But that’s not the point. The point is that it took a second-string NFL quarterback to say something about the unnecessary deaths of hundreds of Americans, while the government simply turned its cheek.

I foresee this so-called boycott blowing over in a week or two. So far, it has had little to no negative financial impact on Nike. In fact, the company’s sales increased by 31 percent in the days after the ad’s initial airing. The company may have lost a handful of loyal customers, but most definitely gained some in the process.

As for me, I’ll rep my Nikes proudly, any day of the week.