Softball to face Sulphur Springs in first round of playoffs 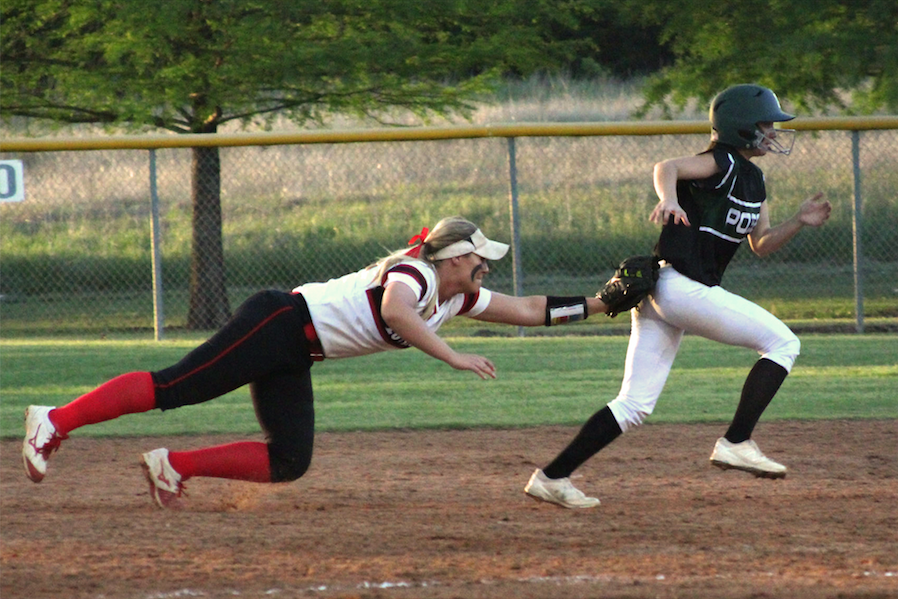 Senior Alyssa Difiore gets runner into a rundown and successfully tags her out in a game against Mesquite Poteet.

The softball team (18-11 overall, 9-6 district)  is set to host Sulphur Springs (16-4, 9-1) in Game One of the Bi-district Championship series tonight at 7 p.m. The winner of the best-of-three series will advance to face Little Elm in the area round of the Texas-5A Division II Playoffs.

According to head coach Jeff Roberts, the team has emphasized the importance of its fundamentals and offensive production.

“Everything comes back to fundamentals and we must go out and score at least five runs in every game during the playoffs to be successful,” head coach Jeff Roberts said.

Senior Alyssa Difiore agreed with Roberts in that the Lady Leopards’ offense must come prepared.

“In order to win, are bats have to be hot, we have to go out and hit the ball hard and score runs,” Difiore said.

The focus on offense can largely be attributed to the team’s three-game losing streak, where the Lady Leopards have mustered just eight runs during that stretch. The most recent two games have resulted in shutouts.

Roberts said that his team will have to maximize its plate appearances against the opposition’s starting pitchers in order to spark the offense.

“I believe we have to outscore them to win the series,” Roberts said. “The more plate appearances we have against their starting pitcher, the better I believe we will do this weekend.”

Roberts added that he is expecting a hard-fought series between the two teams.

“Their coach, David Carrillo, is someone that I consider a friend, and he does a tremendous job with his kids,” Roberts said. “Those girls play hard for him, and I expect it to be a competitive series.”

Difiore expects the team to be focused and ready going in game one.

“We must give 110 percent at all times and take no plays off,” Difiore said. “Every ground ball and at bad needs to be treated with the same intensity and hustle.”