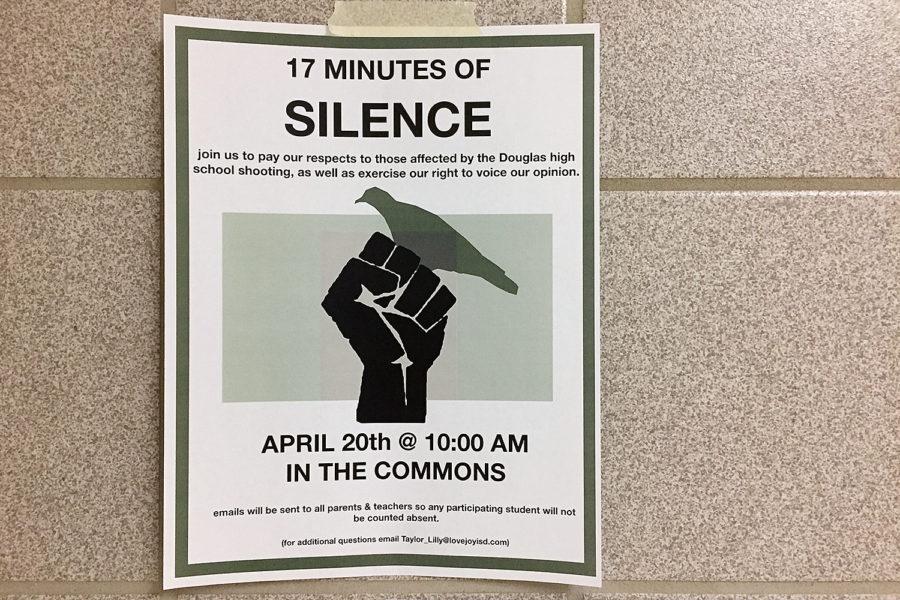 “We may be teenagers, we may not be able to vote, but this is something we’re serious about,” junior Lilly Taylor said.

She felt it was time for change.

After a harrowing experience at her Frisco middle school and the recent Marjory Stoneman Douglas High School shooting in Parkland, Florida this past February, junior Lilly Taylor was inspired to arrange 17 minutes of silence–one minute for each victim at Stoneman Douglas. The event will take place Friday, April 20, at 10 a.m. in the commons.

“I was exposed to the world of mass shootings when I was in middle school because at my middle school there was a kid who had made a hit list, and my friends were on it, my brother was on it, and he was going to take the actions to carry [it] out,” Taylor said. “Feeling that fear just knowing that it could have happened, I wanted to show people that this is an important issue that we need to address.”

Students who wish to participate in the silence will not be punished for missing classes, but instruction will continue as scheduled. If a large enough group of students choose to participate, the gathering will be moved to the gym. Principal Chris Mayfield said this event is not encouraged or discouraged by the school, and the school does not support a certain political stance. Instead, the school supports students.

“It’s really not a matter of promoting or not promoting,” Mayfield said. “It’s really a matter of allowing. That has really been the model that we’ve tried to use every year, which is how can we figure out a way to support students in the things that they want to do versus standing up and saying, ‘No, you can’t.’ Administration would want to have the conversation, ‘How can we support you in the things that you believe and feel strongly about?’”

For Taylor, this event is a matter of gun rights, mental illness, safety, the First Amendment, and honoring the Stoneman Douglas victims.

“When you address the issue of mass shooting, you kind of have to talk about all of it because with gun rights, you also bring in mental illness,” Taylor said. “Like, you shouldn’t be able to get a gun if you do have a history of mental illness that would put you in harm’s way if you had a gun or anything like that. And also, students shouldn’t have to come to school being worried if they’re going to die. This is a safe place, and we should feel safe, so it also brings in student safety and teacher safety.”

Taylor had a conversation with Mayfield when she began brainstorming ways to make her voice heard, and one idea she had was a walkout, similar to ones occurring around the country and ones her friends in Frisco have organized.

“[Mr. Mayfield] was very supportive,” Taylor said. “When I first met with Mr. Mayfield, we threw around some ideas, and the walkout was my number one idea. But there [were] security issues, like getting in and out of school, and also the possibility that students would take this opportunity to leave campus or anything like that, so the moment of silence in the commons is the safer way to do it.”

Taylor is aware of the controversy surrounding school shootings and subsequent protests, and she has been told by a student that the 17 minutes of silence is pointless. However, she said the silence “will show [the] community [students] are serious about this issue.” Administration, too, recognizes the polarizing nature of the event but stresses their sole focus on students, who have been at the center of recent safety discussions.

“Some of the things that we talked [to students] about [in their classes recently] were really more things that weren’t new but were good reminders,” Mayfield said. “I will also say we really all sat down administratively and kind of reviewed some of our own practices and then even since then we’ve continued those conversations.”

Despite these discussions, Taylor feels school security “isn’t the greatest,” as doors are often left open or easy to enter through. She also encouraged greater awareness among students and gun rights for the state.

“I don’t want all guns to be taken away,” Taylor said. “That’s not the point of this. A lot of people, often when they hear ‘restricting gun laws,’ they think getting rid of guns. But I just think it should be harder for people to get guns if they have a history of mental illness. They should take a test when they’re doing their gun registration to see if they’re mentally fit for a gun, and if they have a history of domestic violence or stalking, they shouldn’t be able to get a gun.”

Taylor said she hopes students and the community will leave the 17 minutes of silence knowing “that it’s time for change.”

“We may be teenagers, we may not be able to vote, but this is something we’re serious about,” Taylor said. “And if we can’t vote what we want, we can stage things like this to get our point across.”