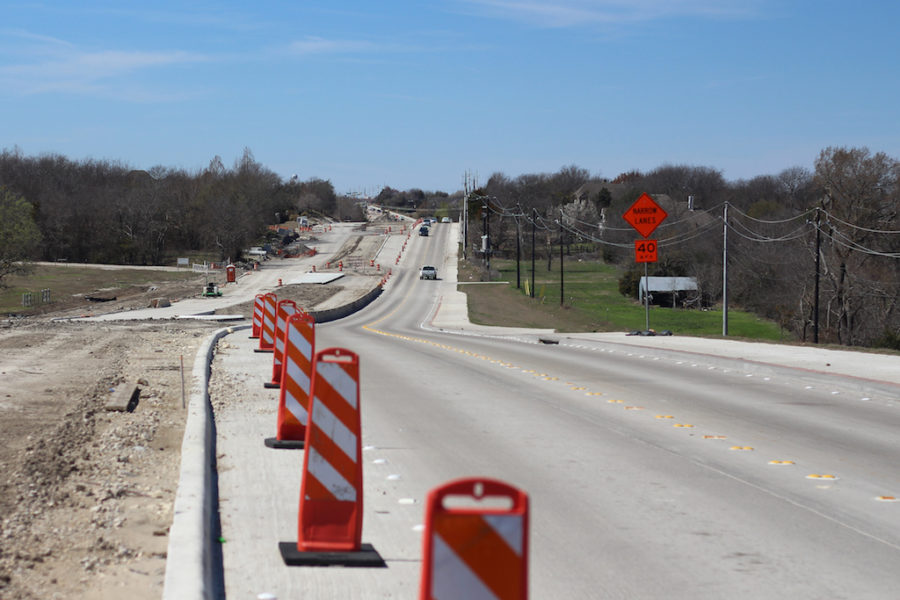 The northern side of the road was completed in July 2017, and the southern lanes were started in January 2018.

The construction occupying much of Stacy Road has been in effect for over two years now but was anticipated to be finished much earlier. Town engineer James Chancellor said the main problem resided in the amount of time it took to complete the northern Fairview lanes, which set back their final completion date. The project is now anticipated to be finished at the end of this summer.

“[Ed Bell Construction Company] started constructing the northern lanes and all the underground drainage work associated with them,” Chancellor said. “Paving on the Allen side did not begin until early January of 2018, so the bulk of their working days had been used up prior to the beginning of paving on the south side.”

The construction of the northern side was completed in late July 2017, 15 months after it initially started. By November 2017, the construction company had used up 84 percent of the time allotted to their project, and finally began constructing the southern lanes in January 2018, affecting the anticipated completion date as a result.

“That was a little behind schedule if you want to complete the project in under two years, or at least before April of 2018,” Chancellor said.

Many residents around the area are anxiously awaiting the completion of the project.

“The construction on Stacy Road has made it harder for me to get to my friends’ houses that live off of Stacy, and the traffic light combined with these construction projects has inconvenienced me on my daily route,” sophomore Lily McCutcheon said. “Once the construction is completed, I’ll be much more likely to drive on Stacy Road.”

Progress on the southern lanes has continued moving forward, except for construction west of Angel Parkway which has stopped due to conflicting projects.

“The gas line owned by CoServ has been found to be in conflict for some of the work [on Angel Parkway], so Ed Bell cannot pour any of that section until CoServ completes their adjustments to the gas line,” Chancellor said. “Hopefully, they will be able to seamlessly move to this middle section as soon as they run out of concrete work elsewhere.”

Along with finishing the original project, an additional project will commence soon to accommodate for more cars on South Highway 5.

“I would assume that this project will be completed over the summer from looking at what is remaining,” Chancellor said. “The cities of Allen and Fairview have also requested some additional work to be done on the intersection of SH5 and Stacy Road, which will allow two lanes northbound and two lanes southbound across the intersection. Currently, only one lane goes north into Fairview from Allen, and the same for going south. This has been approved and will extend the time some.”

The sections of construction on Stacy Road will help to provide the community with easier and quicker routes to common destinations.