Review: ‘Annihilation’ is a flawed but profoundly affecting sci-fi spectacle 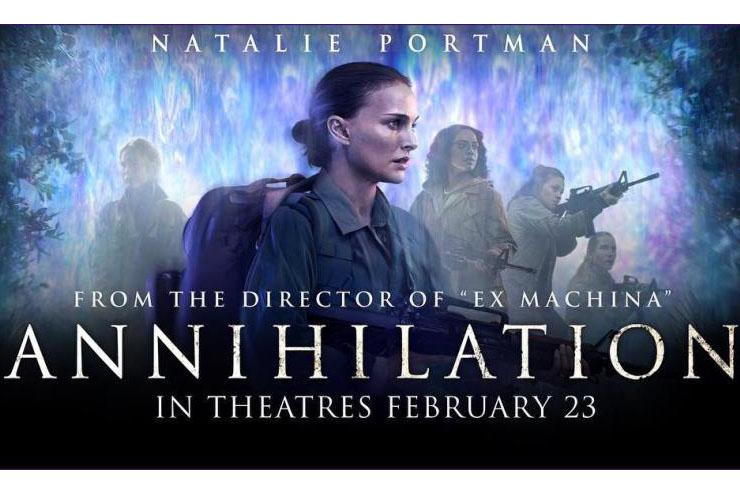 Courtesy of The Buzz

The latest in a stretch of extremely daring movies to be inexplicably widely released by Paramount (see also: “Silence,” “mother!”), Alex Garland’s “Annihilation” is a very good film that is bound to frustrate and possibly even infuriate audiences. A sci-fi spectacle where the answers are unclear at first and even murkier by the end, this is not the kind of film that asks a thought-provoking question and sets out to neatly tie things up in 90 minutes, nor one interested in the fan theories that are inevitably going to appear in the next few weeks. Like the relatively recent “Arrival,” it’s the rare work of science fiction more intrigued by primal human emotion and the lengths we go to in order to express it than by the nightmarish places and creatures it conjures up.

In a smartly progressive, distinctly feminist spin on the classic Russian sci-fi film “Stalker,” biologist Lena (Natalie Portman) accompanies four other female scientists into Area X, an increasingly large zone where the laws of nature seemingly don’t apply. It’s also a place that none of the male-led military expeditions have ever returned from. It should be noted that this expedition is not a suicide mission, as noted by Dr. Ventress (another excellent role for Jennifer Jason Leigh), but rather one of willful self-destruction. All of these characters, each dealing with their own trauma, go to Area X not to find a way to avoid their problems, but instead to find some sort of relief or possibly fix them somehow. Despite the fact that the film contains some of the most gruesome, upsetting body horror in years, it’s oddly hopeful.

Area X itself is extraordinarily well-designed. Whereas “Stalker” depends on sepia tones and heavy, muddled greys for its otherworldly zone, here nearly every color imaginable makes an appearance. The film has a real sense of place, as if Disney’s Animal Kingdom was abandoned and reclaimed by nature. Indescribable, stunning creatures of all sorts exist within Area X’s boundaries, and the glimpses of beauty amid horrific sequences offer a vision of an alternate reality, one where this place is used to heal the broken people who enter it instead of destroying them.

The film is also a bit of a left turn for director Alex Garland. 2015’s “Ex Machina” was perfect from a technical standpoint but emotionally hollow, offering nothing with which to connect. “Annihilation” is the exact opposite. Flaws are abundant and immediately apparent. The dialogue is occasionally clunky and the pacing is awkward, but it works more than “Ex Machina” because there’s something about it that feels extremely personal. A deep sense of loss and longing hangs over every frame, and one wishes that Garland’s script didn’t clumsily explain things the audience is already aware of early on and in flashbacks throughout. The relationship between Lena and Kane (Oscar Isaac) is already powerful without saying much, and it’s refreshing to see a widely-released action movie be so emotionally honest without fear of being called cheesy.

What turns “Annihilation” from a surprisingly decent February release into something truly unforgettable is its haunting, abstract, and nearly silent third act. In an otherwise accessible film, this experimental ending left me utterly speechless and physically exhausted. It doesn’t matter what it’s supposed to mean or what I took away from it, but the fact that a movie can still possess the power to have everyone who views it take away something different in the end is remarkable. The film’s final sequence makes up for every other flaw that comes before with its undeniable intensity and horrific beauty. It is a travesty that this film is going straight to Netflix in other markets when it’s a reminder of why we go to the movies in the first place: to see something spectacular on the largest screen possible.