Review: MGMT’s ‘Little Dark Age’ is sure to please fans of all stripes 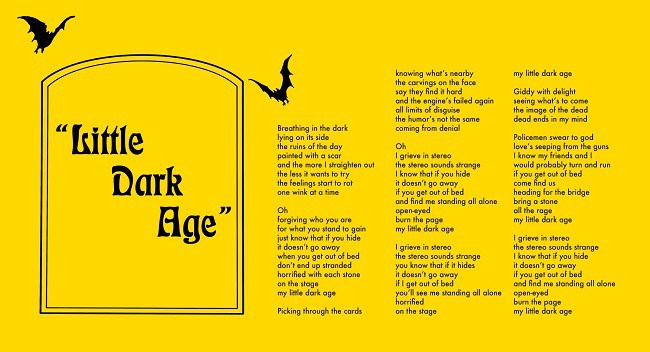 Courtesy of Full in Bloom.

"MGMT dodges dated sounds in favor of a reinvention of the niche they formerly carved for themselves."

After what was essentially a five year drought for psychedelic-pop savants MGMT, the duo reinvigorated the interest of fans with an onslaught of new singles in late 2017. An indication of a return to streamlined, simple synthesizer pop was welcomed by indie listeners, who still had fond memories of tunes including “Time to Pretend,” “Electric Feel,” and “Kids,” which established members Ben Goldwasser and Andrew VanWyngarden as forerunners in the late 2000’s race to indie-pop stardom. The two college students’ seemingly accidental arrival into the popular music sphere with 2007’s “Oracular Spectacular” was compromised as of 2010’s “Congratulations,” with a newfound spirit of experimentation and indulgence in psych-rock sounds.

2018’s “Little Dark Age” follows 2013’s self-titled record, an album with highly convoluted, condensed, and low-fidelity recordings which rendered the band’s sound as unrecognizable when contrasted with the former mixes they had made a name off of. “Little Dark Age’s” aforementioned simplicity and stylistic elements are a return to form, which long time and new listeners alike can come to appreciate. Between the throbbing synthesizers and infectious hooks, MGMT dodges dated sounds in favor of a reinvention of the niche they formerly carved for themselves.

The album opener “She Works Out Too Much” is an upbeat, tongue-in-cheek track which is reminiscent of 80’s exercise videos and appears to depict insecurity in a relationship stemming from a lack of exercise. The instant earworm nature of the song’s hook makes it an easy sing-along upon first listen and concludes with a string of blissful saxophones, which rounds out a song saturated with frenetic energy. An intriguing piece of synthesizer-pop follows with the title track, containing an intoxicating stream of punchy, eerie synths, as well as kicking drum machine. Accompanying the sounds is a fitting sense of ambiguity to the lyrics, as well as a haunting, watery effect donned on VanWyngarden’s deadpan vocals.

Throughout the tracklisting, the record is able to boast a relatively ambitious and diverse sonic palette, with slow burning instrumentals on tracks like the acoustic “When You’re Small” and the ethereal closer “Hand It Over,” juxtaposed to the aggressive and punctual “When You Die” or the upbeat and endearing “Me and Michael.” Though riddled with cliches and a lack of original commentary, the song “Tslamp (Time Spent Looking At My Phone)” is a predictable yet enticing psychedelic-pop entry which makes somewhat vacuous commentary on internet and smartphone culture, yet still manages to stand out for its groove and incredibly catchy hook.

This off-kilter and oddly addicting entry to MGMT’s discography is sure to please MGMT fans of all stripes. For those individuals who view the band’s accessible beginnings through rose-colored glasses, the signaling of a return to said style should provide excitement for a new album cycle down the road. To whomever it may concern in 2018, we can finally acknowledge that MGMT is “back.”