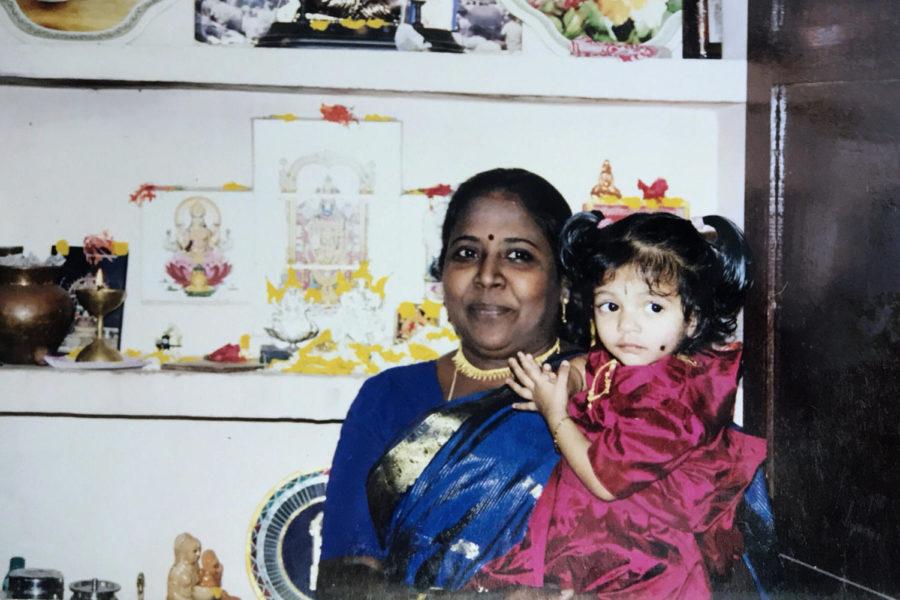 A young Radhakrishnan and her grandmother.

As I stepped off the elevated platform in Chennai International Airport, the cool 4 a.m.  air of Chennai, Tamil Nadu enveloped me like a blanket.

Finally, I was home.

After two years of waiting, 24 hours of delays, and missed connection flights, I was  home.

As an Indian-American teenager, life is confusing enough as it is. My life is a whirlwind of managing my identity as an American and staying in connection with my roots. Sometimes, it feels like I’m a fish out of water, one that doesn’t quite fit in the sea that is America, nor the ocean that is India.

But nothing could beat finally being home after two years of trying to stay in touch with family through missed phone calls and grainy Skype sessions.

It felt like the six months leading up to our trip couldn’t go any slower. On Wednesday, Dec. 20, my dad helped us load all our suitcases into our car, drove us to the DFW airport, and waved goodbye from behind the security checkpoint as my mother, brother and I rushed to our gate to board the plane. But my wish to see my family soon evaded me because, as luck would have it, we had to endure three different delays in three different countries.Time was not my friend. After much rescheduling, we were finally on our flight to Chennai. I could barely sit still in my seat.

Finally, we landed in Chennai International Airport. The faint sounds of the streets were like music to my ears, and the sight of my grandpa’s graying head bobbing amongst the sea of people was comforting.

We finally reached Tiruchirappalli, my home. Our home. The swing I used to play on for hours was still in the back, the marble floors that my baby toys used to call home were as pristine as ever, and the balcony I was too short to peer over as a child, I could look over now.

That’s when it hit me. I had grown up. It was quite obvious in the fact that my grandparents had no idea what I liked to do anymore. In their eyes, I was still a baby. I felt out of place, like I could no longer bridge the gap that had formed in the years I hadn’t seen them. My cousin had no idea who I was. My uncle and I didn’t talk very much at all. Even my brother had forgotten all the memories he had of my grandparents.

I realized time had tricked me. All these years had gone by, and I was left behind, reminiscing about a past that was no more than a mere memory. I saw how time had tricked me in the slight wheeze in my grandma’s breathing and how her once proud stature had wilted. I saw it in my grandfather’s once full head of thick jet-black hair, now thinning and gray. How, once upon a time, I used to stare up in awe as he styled the thick black tendrils of his hair. How I’d get on his shoulders and tousle it all up, giggling as he tickled me in revenge. I saw it in my grandmother’s limping gait and the circles under her eyes.

And it infuriated me.

Why had I missed all of this? It felt like I didn’t really know my family that well at all.

But as the weeks went on, I made another discovery: things weren’t so different after all. My grandpa still called me darling, just as he had when I was a baby, walking across the living room with stuttering steps. My grandma still looked delightedly at me like the galaxy lay in my eyes, just as she would when I’d proudly recite all my times tables when I was 8. My cousin would soon come to me to do her hair in cute little pigtails, sweetly calling me “Akka,” meaning “older sister.” My uncle still thought I was cheeky, and I still teased him for everything. As those weeks passed and the end of our stay came to a close, I saw how everyone rushed to do more things together, to frantically spend as much time together as possible, time tricking us once again.