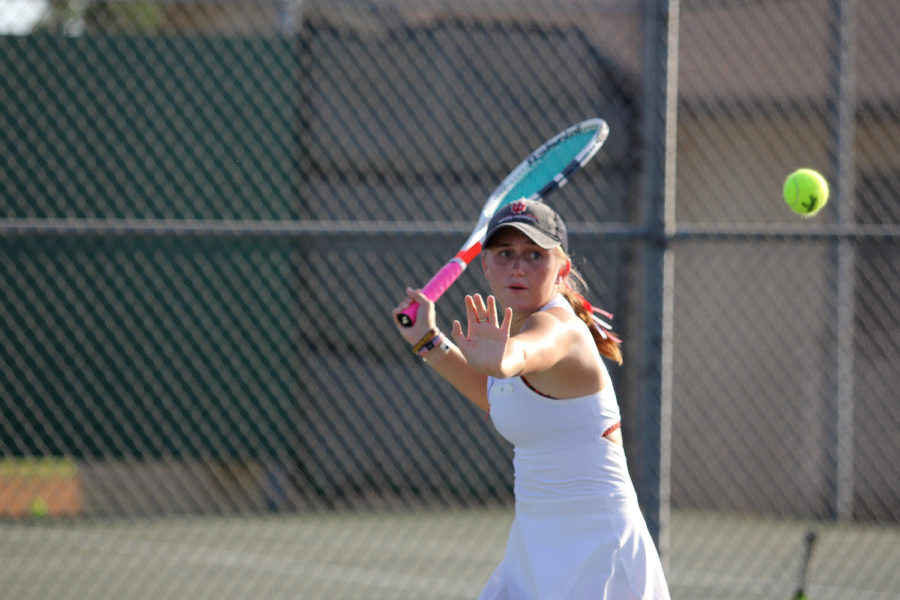 Senior Samantha Hayward aims to return a serve during practice.

After coming off its fall season, the tennis team will transition into individual and doubles competition rather than playing as a team.

The Leopards have their first tournament this Friday in Frisco. Senior Brandon Su said that the team will use upcoming practices as opportunities to prepare for the tournaments as well as the upcoming district season.

“Right now, we’re practicing to get in shape for our individual season events,” Su said. “The tournaments coming up are a chance for us to practice playing matches against other students from other schools and to get ready for district.”

District matches begin in April, and if individuals win throughout the season and fare well against other teams in the district, they will have the chance to advance to regionals and potentially state.

“We are excited to play,” senior Daniela Benigno said. “We have been practicing for a while now, so we are excited for the season to start back up again.”

“In the fall, the matches and season are more revolved around the team,” Benigno said. “In the spring it is individual, so players on the team are playing in different places against different competition. Winning your category is how the players represent the team.”

Junior Caiden Tays said that he is looking forward to the singles aspect of upcoming competition.

“I am excited for the singles season to start because it gives me an opportunity to play good competition and also get ready for the fall season, which is not too far after the spring season,” Tays said.