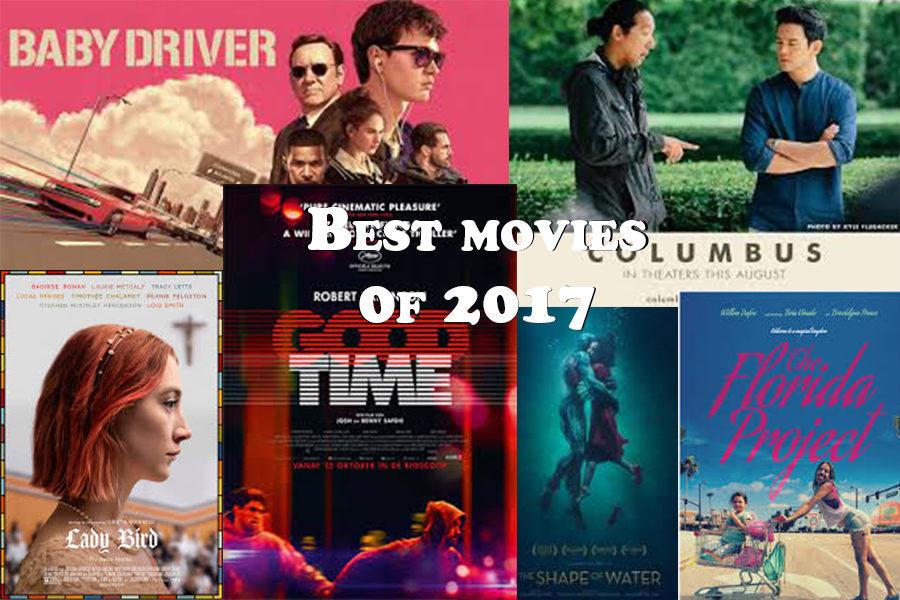 A review of the best films that filled theaters in 2017.

With increasingly dark news everywhere one turned, 2017 wasn’t exactly the happiest year in recent memory. But its best, most resonant films offered something often missing from the big screen over the past few years: hope for a brighter future. Whether that hope came through an outlandish dream (“The Florida Project”), a new relationship full of exciting possibilities, (“Columbus,” “Call Me By Your Name”) or through making peace with oneself (“Personal Shopper”), the movies in 2017 that stuck with audiences were the ones that weren’t afraid to be optimistic.

Before I list my top 10 favorites, I’d like to shout out some honorable mentions that missed the cut for one reason or another: the laugh-out loud hilarious, strangely profound “Lego Batman Movie,” the modern environmentalist fairytale “Okja,” the moving and eccentric Nathan for You special, “Finding Frances,” Jordan Peele’s electric, biting racial satire “Get Out” and David Lynch’s masterful “Twin Peaks: The Return,” which would be near the very top of this list if it wasn’t for its controversial status as neither a film nor a television show, something no one can seem to agree on.

Steven Soderbergh’s slow, relaxed return to heist films isn’t a masterpiece, but it’s not trying to be. It’s a low-stakes heist that’s breezy, charming and absolutely hilarious. For one thing, it has some of the most memorable characters in recent memory, such as Adam Driver’s morose, one-armed war vet. Secondly, it’s the funniest movie of this year, an action film whose brief visual gags are funnier than most R-rated comedies, and also the rare movie that never resorts to making mean-spirited jokes about its characters. Despite its sporadic falterings, it’s a movie so pleasant and gentle that you can’t help but enjoy the ride.

The Killing of A Sacred Deer

Eccentric Greek director Yorgos Lanthimos’ latest offering, in which a surgeon is held under the spell of a young man and subsequently forced to kill a family member or watch his entire family die of a mysterious sickness is a lot to take in, to say the least. But it’s also darkly hilarious and brilliantly directed. Spinning an ancient Greek myth into a cold, modern, and incredibly awkward thriller (think a Stanley Kubrick directed an episode of “Nathan for You”), the film explores the idea of the dissolution of a family through an improbable means. Barry Keoghan gives a terrific performance as Martin, an awkward teen who may be more than what he seems on the surface, and one monologue, in particular, is one of the most uncomfortable, hilarious moments of the year. It’s a movie that is not for the easily squeamish or faint of heart, but one that’s utterly unforgettable, if you can stomach it.

The second collaboration between director Olivier Assayas and actress Kristen Stewart, the first being 2014’s playful, mysterious “Clouds of Sils Maria,” “Personal Shopper” is at once many things: a Hitchcockian thriller for the iPhone age, an examination of celebrity culture not unlike “Clouds,” and a haunting meditation on grief more resounding than “A Ghost Story” and similar films. All these disparate threads would make up a mess of a movie if it weren’t for the performance at its center. Kristen Stewart, further proving her status as one of the best working actresses today, gives a career-best performance as a medium moonlighting as a personal shopper who’s muted by grief and sees signs of her recently deceased twin in everything. It’s a deeply resonant, emotional film that takes multiple viewings to fully untangle but is well worth the journey.

Cars crash, bullets fly, and eclectic tunes play from an iPod Classic in Edgar Wright’s latest, a highly stylized popcorn flick that puts every other action director working to shame. Visually, it’s a spectacle: car chases are choreographed like elaborate musical numbers would be. Just like Wright’s other movies, it’s not a satirical take on crime movies, but a heartfelt tribute to them. Not to mention, it’s a remarkably funny and often sweet film as well, and exactly the kind of wake-up call the modern summer blockbuster needed.

The Shape of Water

The most visually stunning movie on this list, “The Shape of Water” is a fairytale that’s remarkably smart when it comes to the idea of forbidden love. Following a mute woman (played wonderfully by Sally Hawkins) who falls for an amphibious sea-creature trapped in a high government laboratory, the film is at once both a love story and a tribute to the big-screen musicals and melodramas of the 1950s, and Sally Hawkins delivers one of the great modern silent performances.

Korean visual artist Kogonada’s first feature looks absolutely gorgeous, but what’s really surprising is just how emotionally affecting and powerful it is. Haley Lu Richardson gives a beautifully subtle performance as Casey, a young librarian passionate about architecture stuck in Columbus, Indiana as she cares for her recovering addict mother, and John Cho is equally wonderful as Jin, a slightly older man caring for his sick father. It’s the rare drama where a sequel years down the road following the same characters would be more than welcome.

Grittier than “Baby Driver” and infinitely more intense than “Dunkirk,” “Good Time” is a nail-biting thriller that is so propulsive and unrelenting your heart will be pounding for hours after the credits roll. Robert Pattinson gives the best male lead performance of the year as Connie, a mad-eyed, manic criminal; a self-proclaimed “dog in a previous life” attempting to break his mentally handicapped brother out of jail. He does things so despicable that you want to look away, but his charisma and inexhaustible energy keep your eyes glued to the screen. But beyond Pattinson’s phenomenal performance and the Safdie Brothers’ gorgeous imagery of New York, the real MVP here is musician Oneohtrix Point Never, who delivers an all-time great score with layered, pulsating synths that refuse to let up, perfectly complementing the film’s neon aesthetic.

Actress and screenwriter Greta Gerwig’s directorial debut is virtually life-changing, the work of a filmmaker at the top of her game on her first time out. A testament to the power of memory and the intricate complexities of relationships between mothers and daughters, “Lady Bird” is a subtle, simple film that takes stories we’ve heard before and gives them new life and meaning through characters that feel real and a warm compassionate outlook. It’s one of the few coming-of-age films that treats its teenage characters with the same humanity as adults, and as a result, one of the few that resonates with both.

Carefully crafted and delightfully intense, Paul Thomas Anderson’s period piece about an uptight fashion designer in the 1950s is anything but the typical Oscar-bait drama many feared it would be. It’s the accomplished director’s funniest and most disturbing film to date and features one of the most unconventional screen romances in years. Following Daniel Day-Lewis’ Reynolds, the film chronicles his tumultuous, unique relationship with his muse, Alma. Where previous Anderson films focused on relationships where one person is in control (2012’s “The Master”), here both sides are alternately taking power over the other, resulting in a film that’s as horrifying as it is beautiful. It’s also the work of several artists at the peak of their powers; Daniel Day-Lewis has rarely been better, Paul Thomas Anderson’s direction and cinematography are inspired, and newcomer Vicky Krieps commands the screen every second she’s on. Last but certainly not least, Jonny Greenwood’s score is exquisite, gorgeous and slightly eerie, just like the film it accompanies. It has all the makings of a cult movie in a genre that usually doesn’t produce them, and won’t be forgotten anytime soon regardless of whether it gets awards recognition.

At once a vital testament to the joys of youth and a sobering portrayal of modern life below the poverty line, Sean Baker’s “The Florida Project” is one of the landmark American films of the decade thus far and the film its director was born to make, not because of its gorgeous visuals or lifelike performances (many from first-time actors), but because of its sheer compassion. Baker understands that poverty is not as simple of an issue as other films make it seem, and the movie never stoops to exploiting these characters or trivializing them. Brimming with life and vibrant, Disney-like color, the film is so undeniably humane that it’s hard not to be emotionally overwhelmed by the children and their plight. Years down the line, when one thinks of the films of 2017, this will be the one that sticks out.