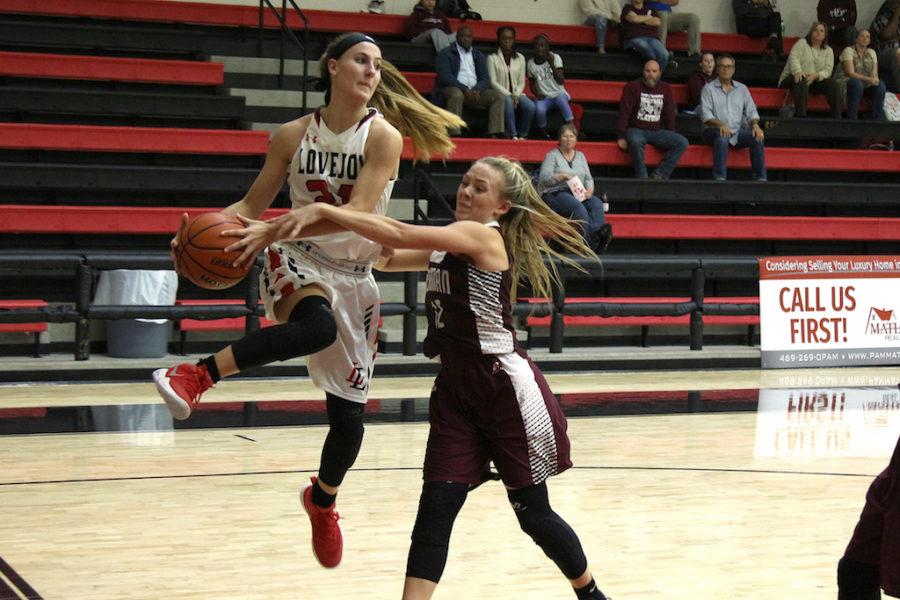 Sophomore Carsen McFadden leaps to avoid a defender and throw a hook pass.

The girls basketball team (10-5) will compete in the Princeton basketball tournament Thursday through Saturday. The team will face Lubbock Christian at 11:30 a.m in their first game of the tournament.

Sophomore Carsen McFadden said the team has a simple goal going into each tournament.

“We always want to compete and win the tournament,” McFadden said.

Last weekend, the team played in the Buda Hays basketball tournament, finishing second out of a pool of 32 teams, going 4-1.

The team defeated El Paso Del Valle 52-37 in the first game and then went on to win against Austin High, which is ranked number 23 in the Texas Association of Basketball Coaches 5A state rankings 46-38. The team then won in a narrow victory over Dripping Springs 47-43 and beat San Antonio Johnson 51-43 to advance to the championship game. Ultimately, the team fell to 6A Cedar Ridge 58-54, which is ranked 13th in the state in the TABC rankings.

“It is such a great honor to be recognized for my play in the tournament, but really a player is only as good as the team around them, and I am lucky to have them as teammates,” McFadden said. “We played good team ball and were able to compete against every team.”

After the tournament, the team earned state recognition, as they were ranked number 21 in the TABC rankings and number 20 by the Texas Girls Coaches Association.

On Tuesday, the team defeated Denton Braswell 56-45. The team had a strong first half as they built a 13 point lead heading into halftime.

“We did a good job of attacking the basket to get easy layups against Braswell,” Boxell said.

Rekieta said the team did well despite lacking energy after the team played five games in the Buda Hays tournament.

“I thought we were lacking some energy, but we started to put the pieces together and eventually got the win,” Rekieta said.

“Our first district game is on December 12 versus Highland Park,” Boxell said. “They beat us twice last year, so we are looking forward to the opportunity to try to open up district play with a statement win.”