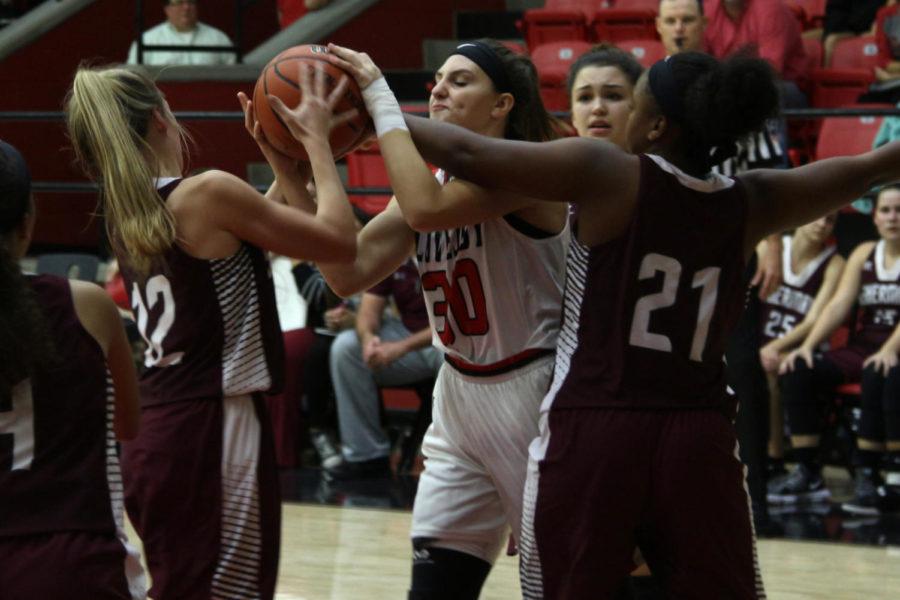 Junior Alexandra Brungardt fights to secure the ball from the Sherman defenders.

The girl’s basketball team (1-1) will go on the road to compete in The Colony Basketball Tournament on Thursday, Friday, and Saturday.

The team will play in two games on Thursday against Frisco Reedy and Lake Dallas High School. Then, they will play their last game of pool play against Arlington Heights on Friday at noon.

“We expect to compete for first place in our pool,” head coach Lance Boxell said. “Our goal is to win all of our pool games to give us a chance to play for the championship on Saturday.”

Senior Taylor Meixelsperger said the team is concentrating on their weak points this week in practice.

“We have had a tough time running our plays, so in practice on Wednesday we focused and worked on all of our plays,” Meixelsperger said.

“We did a good job against Sherman of applying defensive pressure,” Boxell said. “We were able to force 28 turnovers, which led to easy transition points for us.”

The team, however, did not make as many threes as they were hoping for.

“We did not shoot the ball well from outside,” Boxell said. “We shot only 19 percent from the three point line.”

Meixelsperger led the team with 23 points against the Bearcats.

“I feel like I played a good overall game,” Meixelsperger said. “I was in a rhythm scoring and had a good amount of rebounds and assists.

Senior Kim Lyne has big expectations for the team this year.

“Our goal is to make it to the playoffs and make a big run,” Lyne said. “We all have to go into games with a positive mindset, also.”

After the tournament, the team will go on to face Wakeland High School.