Football to head to Sulphur Springs for first round of playoffs

Team will ride a five game win streak into the playoffs 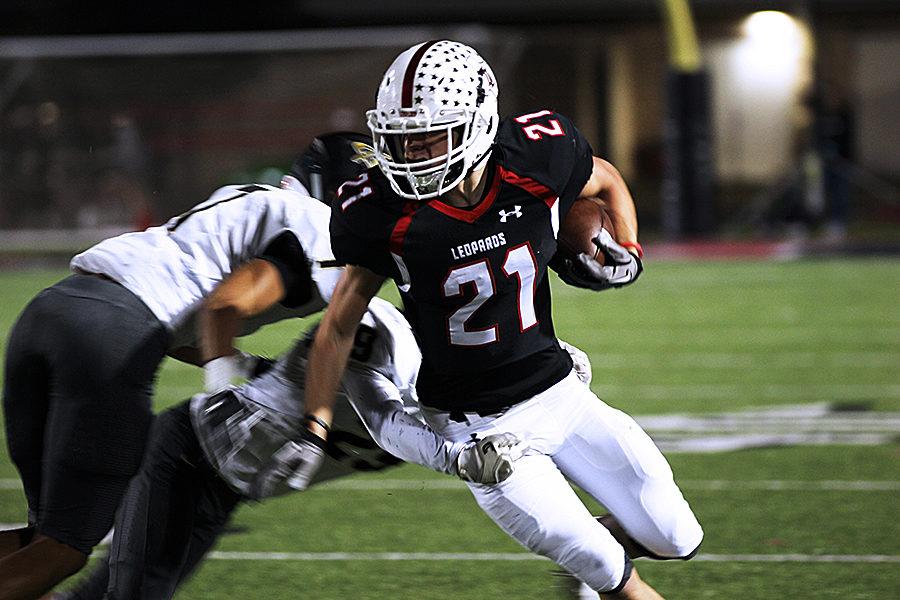 After a 0-5 start to the regular season, the football team (5-5 overall, 5-2 district) closed out the season on a 5-0 run and now finds itself as the top seed from District 15-5A in Region 2 of the Texas 5A Division 2 Playoffs.

The Leopards will square off against the Sulphur Springs Wildcats (5-5, 3-3) on Friday night at 7:30 p.m at Sulphur Springs ISD Stadium in the first round of the single elimination playoffs.

Offensive line coach Dustin Gunter said that he believes that team is excited to have the opportunity to start the playoffs in a challenging environment.

“[Sulphur Springs] has a lot of tradition,” Gunter said. “They’ve won a state championship with their current coaching staff, and they have great support from their community. We will be going into a hostile environment, but there’s nothing better than if you can go in there and come out with a ‘W.’”

Senior linebacker Bumper Pool said that the team is looking to use the hostile environment as motivation to lock in and embrace the underdog mentality.

“I think it’s going to make us play better,” Pool said. “When we play on the road, we have to lock in, and we have to get that mindset of ‘we’re the underdogs’ because we have played better when we have been the underdogs.”

Pool, who also plays offense in certain situations, said that Sulphur Springs has one particular strength that stands out on film: its defensive line.

“Their defensive line is their strength,” Pool said. “They have one of the best defensive ends we’ll play all season. If we can take care of him, we can work some different angles and do some certain plays that will make us successful.”

On the offensive side of the ball, Sulphur Springs is led by senior quarterback Ryan Humphries, who propelled the Wildcats into the playoffs by engineering a three-game win streak to cap off the season.

One of Humphries’ primary targets on offense, Simeon Taylor, said that he respects Lovejoy’s defense but also believes in his coaching staff’s game plan.

“I have seen [Lovejoy’s] defense, and they are pretty solid all around,” Taylor said. “We need to respect them, but our coaches have worked hard on our game plan this week and feel good about what we need to do going into the game Friday to execute it.”

Taylor also said that he feels the Wildcats have a key advantage on in the game with the home crowd.

“I feel that we have a big advantage with our fan base on our side Friday night,” Taylor said.

Pool said that the defense is prepared to see a Sulphur Springs offense that is similar to some of the previous ones it has played against this year.

“They’ve got a mobile quarterback and a running back that runs downhill hard, [but this is] nothing we haven’t seen this year though,” Pool said. “We’ve played some good teams, I feel like we have a good game plan, and I expect that we’re going to take care of business.”