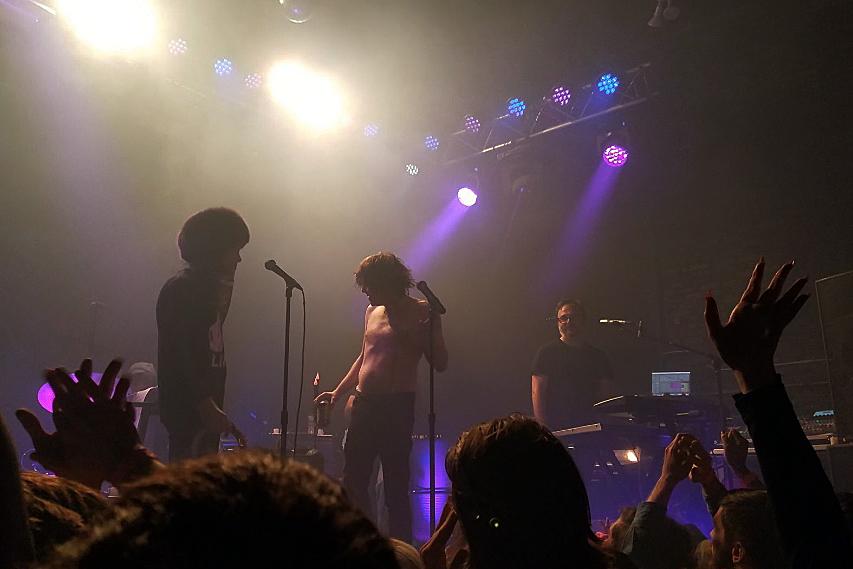 "The decorations and general sensation derived from the presentation of the stage was harmonious with the more eerie cuts on the album, and Ariel’s haunting vocal deliveries further enhanced the energy."

In recent memory, the overarching genre of popular music has lacked a genuine oddball, somebody capable of turning the pop sphere entirely on its head. Ariel Pink, the charismatic singer-songwriter hailing from Los Angeles, has filled and flourished in this role since his humble beginnings in the early 2000’s, which consisted of captivating, low-fidelity tapes that garnered immediate attention.

As expected, Pink has been traversing the country and enchanting audiences subsequent to the release of his latest hypnagogic pop project, “Dedicated to Bobby Jameson.” The studio recording of the album is a pleasurable trip through a diverse sound palette of vintage pop sounds, which are fed through a silly yet tasteful filter. Upon attending his performance at Trees in Deep Ellum, it’s evident that Ariel and his ensemble’s live show is as imaginative and thrilling as one would expect given his discography.

A sense of eccentricity was immediately established with the opening act Bite Marx, an energetic synthpunk solo act brimming with humorous lyrics and uncanny dance moves. It was actually relieving to see the audience involved to such a strong extent, as it set up an atmosphere ripe with vibrancy for Ariel to take advantage of. I was contented with the fact that Ariel selected an L.A. contemporary to open for him, as he gave a relatively unknown Bandcamp musician a platform to showcase his talent.

The decorations and general sensation derived from the presentation of the stage was harmonious with the more eerie cuts on the album, and Ariel’s haunting vocal deliveries further enhanced the energy. These sinister tracks were woven in with the more glamorous and ethereal moments, and Pink dug deep into his back catalog when he surprised the audience with songs like “Alisa” and “Thespian City,” which date back to his vintage “Haunted Graffiti” output. Moments like the mosh pit during “Time to Live” made for a pure adrenaline rush. Additionally, the show led me to gain a newfound enjoyment of the songs I found slightly underwhelming upon initial impression.

The diametric between frenetic, sweat-soaked moments and more sublime stretches made for a completely unpredictable performance, a quality which echoes in Ariel Pink’s public persona and behavior. The ability to transition between pop hits like “Put Your Number in my Phone” and ballads of obscurity while keeping the audience’s attention is a distinguishing quality of Pink. Beyond Pink himself, the supporting group consisting of a guitarist, bass player, keyboard player, and drummer were equally invested and feverish.

A highlight of the show was the ceaseless crowd-surfing, which several crowd members partook in. Bite Marx and Pink participated, as well,  which further enhanced the intimacy of a show at a relatively small venue. This amity among attendees and the artist was also on display when Pink pulled an audience member on stage to perform alongside him. Such quality of performance coupled with relentless creative output in the studio is sure to keep Pink a relevant artist and will cement his place in the history of experimental pop music.