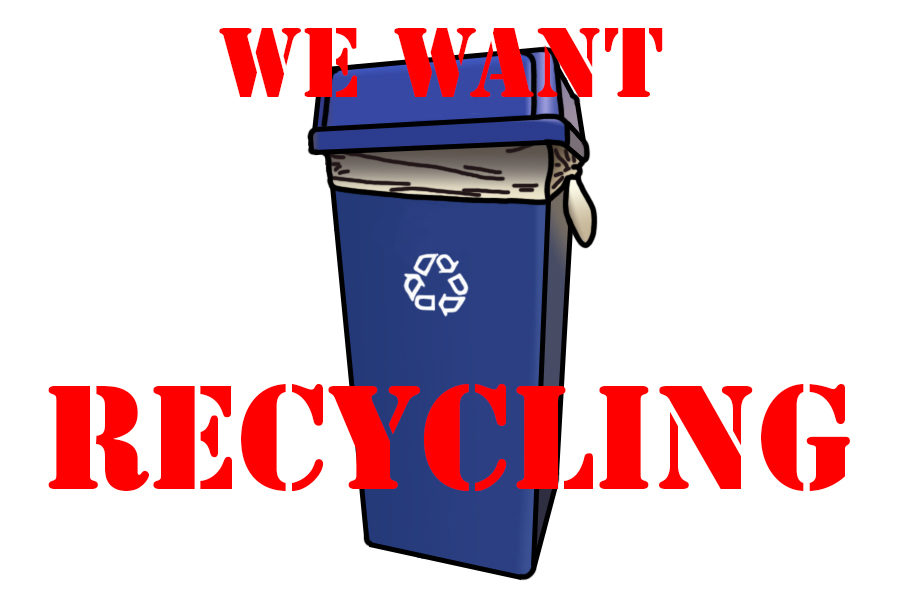 Environmental club president Jerad King hopes to bring recycling back to the city of Lucas.

Once a week, before most people are even awake, the trash outside each house in Lucas is collected. This task is often left in the background, with many simply going through the motions of gathering trash and bringing it to the curb. However, the environmental club is working to bring attention to said task by petitioning to bring recycling back to the city of Lucas.

“On Saturday the 11, environmental club volunteers will be going door to door gathering signatures and encouraging citizens to write letters,” senior and environmental club president Jerad King said. “It is a relevant, local, environmental issue, which made it a perfect opportunity for our club to have a positive impact in our community.”

The environmental club hopes to rally community support in their mission to bring back recycling. King said the club will be an “important force” in helping curbside recycling return to the city.

“Lucas is a community that loves to support Lovejoy High School,” King said. “If people see students getting involved, they’ll be more motivated to incite change.”

Environmental club sponsor Pam Simmons-Brooks said the club has worked extremely hard and are extremely passionate about the cause.

“The club members are passionate about these environmental club issues, especially recycling,” Simmons-Brooks said. “When recycling is made available again, our members can be proud of participating as environmental advocates, which is tied to one of our pillars of the Graduate Profile: ‘works for justice in the community.’”

The chance for the environmental club to help the community in a significant way has made those who plan to volunteer ready and excited to pitch in.

“I think an opportunity like this can show that we can truly make a difference,” senior and environmental club member Kyle Fisher said. “We can work to bring change that may not have been achieved without our involvement.”

Whether or not Lucas has recycling may seem like a simple decision to some, but King said the issue is a bit more complicated than it appears.

“According to the current waste management company, Barnes, recycling became too expensive,” King said. “They had to deal with a large number of contaminated goods, which means that people were putting too many non-recyclables in their recycling bins. The company that takes the waste charges extra for contaminated goods– up to four times the normal price.”

While there is a financial obstacle, King believes recycling is still plausible.

“In a world where we buy so much and throw so much away, it’s important that we find ways to reduce the amount we throw away,” King said. “Recycling is the best way to do that.”