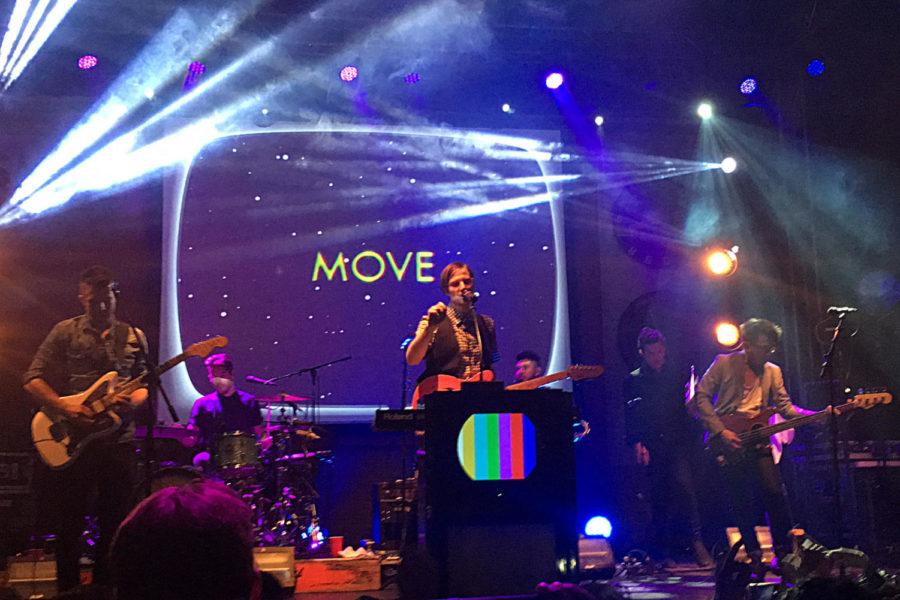 "The show overall had a great theme and made you feel as though you were actually in the audience of a late night talk show."

Ever since their first debut as a band in 2009 with their release of their EP “ForPlay”, Saint Motel has sat in the background of the pop and indie rock scene. They have toured with many popular bands in their genre like Lights, Weezer, Arctic Monkeys, and Panic! At The Disco. They recently came to Dallas on Nov. 1 to perform at the Granada Theater as a part of their “Late Night with Saint Motel” tour.

The show was in the style of a late night talk show. The set had a background of a retro tv,  2 live cameras, a podium, and an applause sign all on stage. Between acts, there were vintage commercials playing to pass the time. This is a nod to lead singer, A/J Jackson’s, career as an editor of tv commercials. The show overall had a great theme and made you feel as though you were actually in the audience of a late night talk show.

Gibbz was the opening act on this tour. The musician is a one-man show. He plays the keyboard, mixes, and plays the guitar all while he is singing. It’s quite impressive to see him work on stage. His music is a nice blend of indie and pop. While he is a very talented artist, his music was too chill and lowkey, which did not hype up the audience for Saint Motel.

During the break between Gibbz and Saint Motel, many people were enthralled with the vintage commercials, or going to the vendors to purchase the well-designed merchandise. The audience was quite diverse. People of all ages, races, and gender were crowded together.

Saint Motel started their set with “Puzzle Pieces” from their Voyuer album. “Puzzle Pieces” being one of their most popular songs was a song nobody wanted to miss. When the first chords started playing the crowd pushed forward and people who were in the bathroom or buying t-shirts ran towards the stage area. This song was well received by the audience and encouraged everyone to dance and sing along.

“You Can Be You” started with a chill beginning with Jackson, casually walking around the stage. Once the song reached the second chorus, Jackson jumped up on the podium at the front of the stage and yelled to the audience to turn on their flashlights and wave them back and forth like lighters. Jackson then prompted the cameras on stage to be pointed towards the audience and had the live footage projected on the retro tv backdrop.

About halfway through the set, the band played a cover of  “Something About Us” by Daft Punk. This wasn’t well received by the audience due to lack of familiarity. The song was also quite slow and more of relaxing music than a jam to pump the crowd up.

“1997” was the favorite of the whole night. Once the tune began, the whole crowd went crazy. The audience was a wall of sound. Jackson faced the microphone towards the crowd for most of the song as he smiled. The projection of the crowd was up on the retro tv, and the crowd jumped to the rhythm.

Throughout the entire show, there was great energy from the band and the crowd. Saint Motel’s music sounds better live than it does through headphones. This show was an energetic event leaving the audience wanting more.