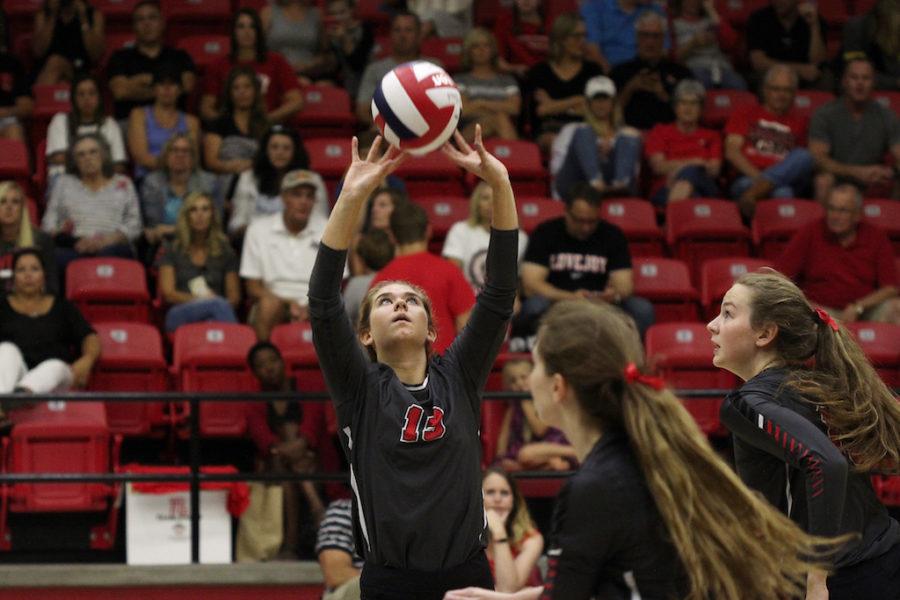 Junior Gracie Sutherland sets the ball to execute a play against Royse City.

Seeking to keep its district record unblemished, the volleyball team (26-9, 4-0 in district) will take on fellow undefeated district opponent Highland Park (18-16, 4-0) on the home court Friday at 5:30 p.m. Head coach Jason Nicholson said the team will get a first look at the full strength of the Scots Friday night after injuries plagued their preseason.

“They have a lot of good kids, but they are young,” Nicholson said. “So it’ll be interesting to see how they respond to the pressure and hopefully we have somewhat of a rowdy environment, if we get the fans in here, to get in the younger players’ heads.”

This year’s Highland Park squad had some significant holes to fill after graduating District 15-5A Most Valuable Player Jordan Westendorff and District 15-5A setter MVP Madeline Ngo from last year’s squad, that split 1-1 in districts with the Leopards.

With those centerpieces gone, senior captain Annabelle Archer said the team will be focusing on limiting the kill chances for the Scots’s senior outside hitter EC Stanzel.

“She has decent ball control and really uses her left hand to her advantage,” Archer said. “We just saw a lefty against Forney so we should be prepared for her. If we just shut her down with the block and play good defense around it we should be fine. She isn’t anything we can’t handle.”

The Scots shared similar preseason opponents and tournaments with the Leopards in scheduling competitive 6A and 5A schools like Southlake Carroll (29-3), Hebron (24-7), and Bishop Lynch (23-4). However the Leopards have fared better than the Scots against their common opponents (12-6 versus 7-7) according to MaxPreps.

“They do a good job of scheduling in the preseason like we do,” Nicholson said. “However, like I said it is still tough to gauge where they are at or really what their record means due to the injuries they have had.”

For the Leopards to maintain their goal of a perfect district run, senior captain Shanel Bramschreiber said the girls need to come out strong versus the Scots as a slow start could be a deciding factor in a more competitive match than their last four games.

“It’s been an easy start so far because our competition hasn’t been as good in districts,” Bramschreiber said. “So playing against a better opponent like the Scots, it’s going to have to be a quick adjustment to come out and play at a high level again. We can get away with playing at a lower level against our other district opponents, but that won’t be the case in this matchup.”