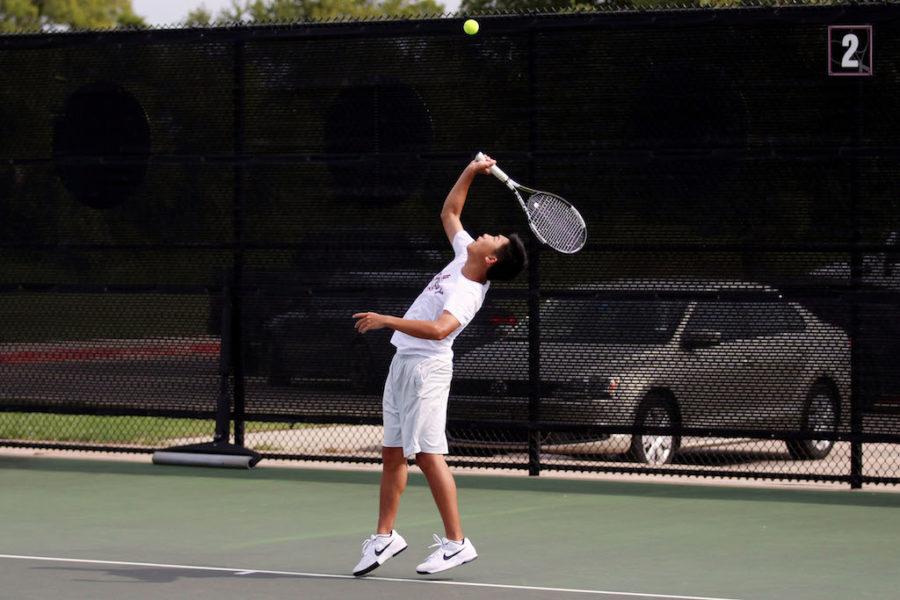 Junior Daniel Xue practices his jump serve in preparation for a matchup against Wylie East.

After shutting out both West Mesquite and Forney 19-0 over the last two weeks, the tennis team goes on the road Tuesday afternoon to compete against district foe, Wylie East at 4 p.m.

Last year, the team defeated the Wylie East Raiders 19-0 and they hope to pull out the shutout once more in the match today against last year’s area semifinalists.

Head coach Adam Cherry said the team looks to continue their success and build on their number six ranking in the state by TTCA.

“Even though this is just an initial ranking, I hope we climb and finish even higher,” Cherry said. “I care more about where we finish than where we are now.

The team continues to play strong competition, as they have lost to 6A programs Amarillo (6-13) and Prosper and top 5A team tennis programs like Highland Park who is ranked number one in the state by  TTCA.

“So far this year and during the preseason we have played a lot of good and high-ranked teams,” junior Sydney Wong said. “The caliber of players we have played against has also been really good.”

Senior captain Jack Bennett hopes to return to the court and contribute immediately when he is fully recovered from an abdominal muscle injury.

“I am supposed to be back to full health by Wednesday despite having a few setbacks,” Bennett said. “Being back on the court helps the team because I bring energy and push the other players to get better.”

After the district match this week against Wylie East, the team will take on North Forney at home at 4 p.m.