Theatre prepares to put on two shows this season 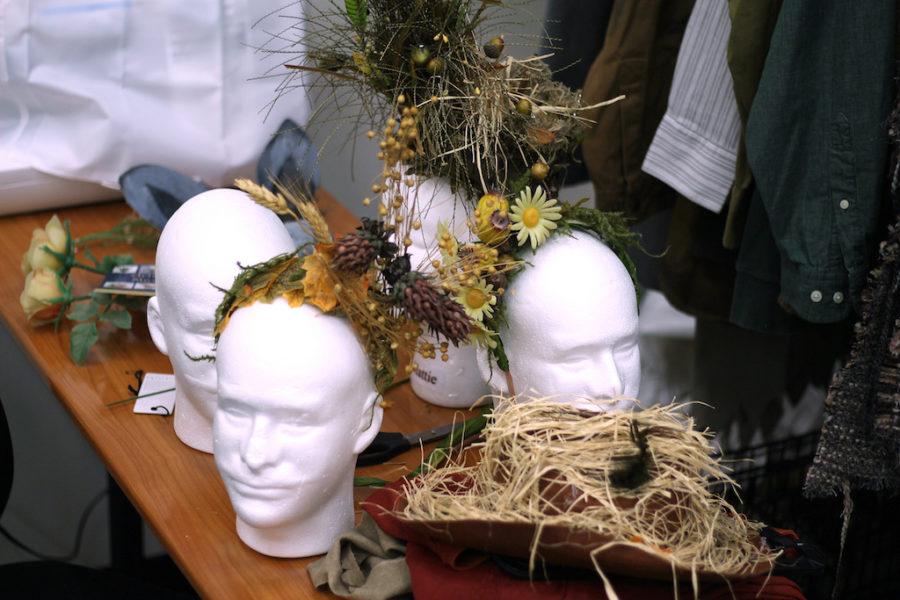 The theatre department is crafting head pieces for actors to wear in the production of A Midsummer Night's Dream.

The school starts to empty out at 4:15 p.m. However, the theatre room can be found occupied until 6:30 most nights by the cast, practicing and rehearsing for two upcoming shows.

“I would have been happy going with either one [play],” senior and stage manager Mason Taylor Long said. “I love them both. I love both the directors, so it’s such a cool experience getting to work with both directors, as a senior, then going into college.”

For the first time, the theatre department is bringing two shows to the community simultaneously: a new rendition of “A Midsummer Night’s Dream” by William Shakespeare and “The Ant and the Grasshopper” by Samuel French.

The production of “A Midsummer Night’s Dream” will be directed by technical theatre director Timothy Doyle and performed on stage in the high school auditorium. The script is well known among students and incorporates romance, drama, and comedy. Doyle had tech directed the show at another school and was already familiar with the script.

“It was also a script that, even though it’s Shakespeare, it was very accessible for high school students,” Doyle  said. “It was important to do a classical show this year because we didn’t really get a chance to do one last year. It was important that our students were well-rounded in that genre.”

This version of  “A Midsummer Night’s Dream” will include fairies, donkeys and royalty, all set in Athens, Ga. during the 1930s. There will be a selection of music incorporated into the show, along with southern accents. Senior Jessica Lucé, cast in the role of Puck, said that nothing will really change in the play, despite the unique setting.

“We’re incorporating it with a lot of music, very much like that era, so we’re using instruments and using voices and singing some of those Shakespeare [lines], but it’s going to be different because usually Shakespeare is English and proper,” Lucé said.

Theatre director Jessica Brewster will be overseeing the production of “The Ant and the Grasshopper.” The show will be performed for several elementary schoolers, as it will be traveling to Puster, Hart, and Lovejoy Elementary Schools.

“I chose ‘The Ant and the Grasshopper’ because I’ve directed it before, and we already had some of the supplies that it took to do it,” Brewster said. “If we were going to do two shows at the same time for the first time, I wanted it to be a show I was very familiar with, and that I already had some resources for so it wasn’t quite so much work as it normally would be.”

The theatre department currently has a renovated black box theatre, the auditorium, and the theatre classroom to use for rehearsals.

“We have more space [this year], and it’s easier because we have more places people can go and do something else while we’re blocking a scene,” Lucé said “It’s very helpful having the black box and everything else.”

“The Ant and the Grasshopper” will begin performances on Sept. 21. “A Midsummer Night’s Dream” will be performed on Sept. 28 and 30. Brewster said that having two separate casts has made the challenge of producing two shows easier.