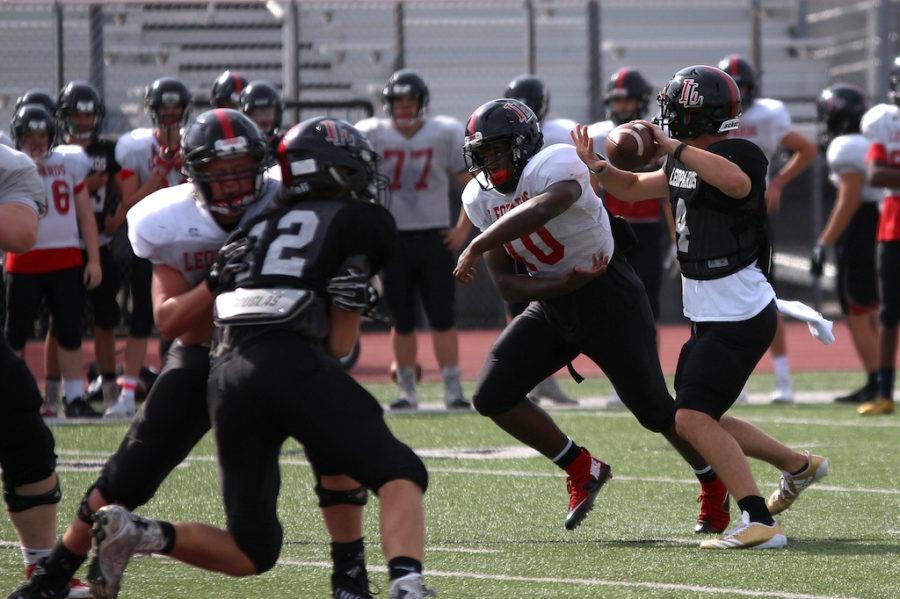 Junior quarterback Carson Collins looks down field during practice. The Leopards open the season Saturday vs. Argyle at the Tom Landry Classic in Allen.

With a renewed perspective following the ups and downs of the 2016 season (3-7 overall, 2-5 in district), the football team will look to begin the 2017 campaign on the right note in its season opener.

The team will make the short trip to Allen High School on Saturday night to take on the Argyle Eagles in the Tom Landry Classic at 7 p.m.

Senior linebacker Bumper Pool expressed the significance of getting off to a strong start in order to gain momentum early on in the season.

“I think last year’s loss to Argyle definitely put us back,” Pool said. “I feel like we still had momentum going in because we knew they were a good team, but I think this season we can set the tone early, and it will propel us to do good things during the season.”

Head coach Todd Ford said that the one of the key factors in the outcome of last year’s 33-21 loss to Argyle was third down defense and hopes that his team can adapt to new tactical schemes.

“It was a very close football game,” Ford said. “We had two long drives that hurt us defensively. We had them on third and long several times and allowed them to convert. Offensively, I think it was good for us to continue to learn and evolve because it was our first game with the new schemes offensively, defensively, and on special teams.”

While last season’s tightly contested game didn’t end in the result the Leopards were hoping for, senior wide receiver Chase Van Wagoner is determined to use last year’s defeat as a chance at redemption.

Junior defensive back Chase Coronado said that he and his teammates would love to get even with Argyle but also said that it is important to move forward, regardless of the result of Saturday’s game.

“Of course we would love to get revenge on these guys; there would be no better feeling,” Coronado said. “But after the game, no matter what the result is, we are onto the next one.”

Van Wagoner explained that the offense has focused on attacking what is a high risk, high reward Argyle defense in practice this week.

“They play a man-free defense, which means there’s one free safety, and the rest of the players are matched up with our receivers man-to-man,” Van Wagoner said. “As receivers, we have specific routes against man coverage to either open up the space for the run game to work or beat them deep by outrunning them on fly routes.”

On the defensive side of the ball, Coronado said that the defense has some key advantages in the matchup.

“I feel that we match up really well with Argyle,” Coronado said. “We have a huge advantage with our interior defensive line. We should put a lot of pressure on their quarterback.”

Although Saturday’s game is officially considered to be at a neutral site, Pool is excited to have the opportunity to play at a large venue that is still very close to home.

“The sight is neutral, but it’s right down the street from us, so we have a slight advantage,” Pool said. “I hope that everyone comes out. I think that this can be a big game that we can call a home game because we’re so close, and we’d like to have a big crowd to get us some momentum.”

In addition to playing under the lights at Eagle Stadium in Allen, there will be some added significance for the players and coaches, as the event commemorates famous football coach Tom Landry.

“To be able to honor the late Tom Landry is special because he was a great role model both on the field and off the field, and it’s an honor for us to play there,” Ford said.