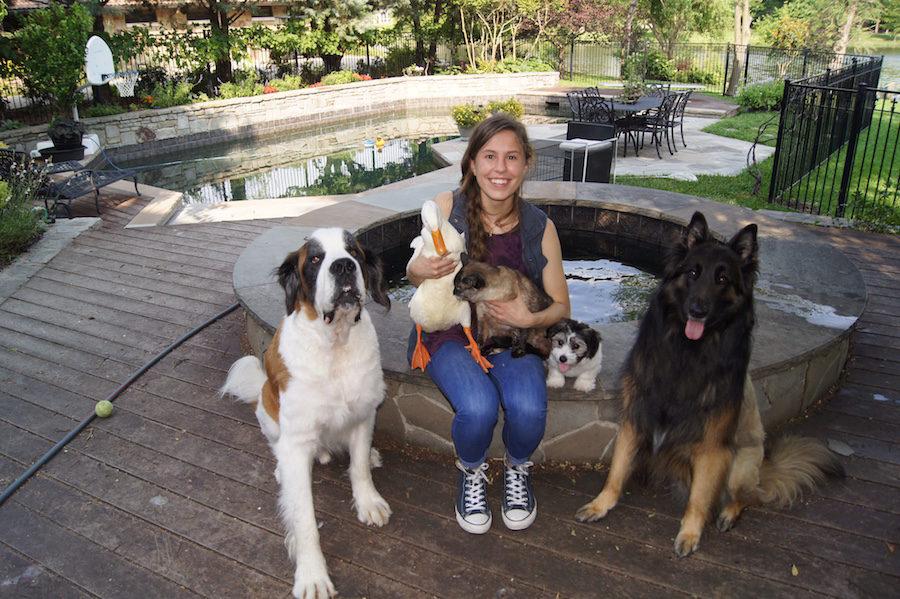 Junior Meredith Ehlmann has her hands full with the 30 animals she takes care of.

After junior Meredith Elhmann walks into her home after a day at school, she’s greeted by Chopper, a Saint Bernard, lashing his head around in excitement, followed by a swarm of more than 30 other animals.

“It’s a great learning experience and it brings a lot of different personalities to the house,” Ehlmann said. “It just makes your life a lot more interesting.”

The Ehlmann family owns three dogs, two cats, a cockatiel, four betta fish, a chameleon, 13 koi fish, seven geese, and a duck. Ehlmann said both of her parents were raised on a farm and always encouraged her love of animals. The family’s amount of animals grew starting after they had two dogs, two cats, and a bird.

“I was at a birthday party, and there were just a bunch of kittens running around, and then  my mom was like, ‘Take one,’ so I came home with a cat,” Ehlmann said.  “One time we were at an animal shelter and we found another cat. So we bought it because [my mom] was like, ‘Wow, 25 dollars for a purebred cat.’ As we were growing up my sister and I really liked animals, and my parents were cool with us just getting more, I guess.”

Ehlmann said she is able to manage taking care of her animals very easily most of the time, and that they are more of a pleasure to have than a hassle.

“Definitely feeding them sometimes, I’ll have to call my parents and ask them to do it when I get back really late, but usually I find time,” Ehlmann said. “I’ll find time to hang out with my dogs. [It] usually helps me wake up in the morning. I’ll pet my dogs for at least 20 minutes before I start getting dressed, and then after school I’ll probably hang out with the geese because they don’t like to wake up until later. It’s a lot better than doing homework.”

The Ehlmanns have a lake on their property for their koi fish, and most of their animals are able to roam in the yard during the day. Ehlmann said having so many animals together has let her experience new aspects of wildlife that aren’t normally seen.

“Like the geese, for example,” Ehlmann said. “A lot of people are afraid of them. It’s really fun if you sit out in the yard and [if] you just yell, they come from wherever they are and they sit around you, and if you lay down they sit on top of you. So that’s pretty cool, and just taking care of them is a lot different. It just offers new personalities to animals that you wouldn’t quite see. My dog and my duck are best friends, and they play with each other, and it just offers more different ways to see animals.”

Friend, junior Ryan Irwin, said that Ehlmann’s animals compliment who she is.

“For some reason it’s definitely in her personality,” Irwin said. “It’s really funny to see just how chaotic it all is when she’s taking care of her animals, and it’s just a lot of fun. I still feel like, even without all her animals, she’d still be who she is, but she definitely has a lot more love in her heart [from having the animals,] to be corny.”

Meredith’s sister, Elizabeth Ehlmann, said the two have worked well together to take care of and raise their animals, and that owning so many animals has become an interesting part of Meredith’s life.

“I do believe that owning so many animals have helped develop skills like responsibility,” Elizabeth said. “Other skills she has developed from taking care of animals include patience, understanding, and her ability to be a good teacher.”

Meredith’s favorite animal is her duck, and she said she believes her parents allowed them to have as many animals as possible so that should could learn from them.