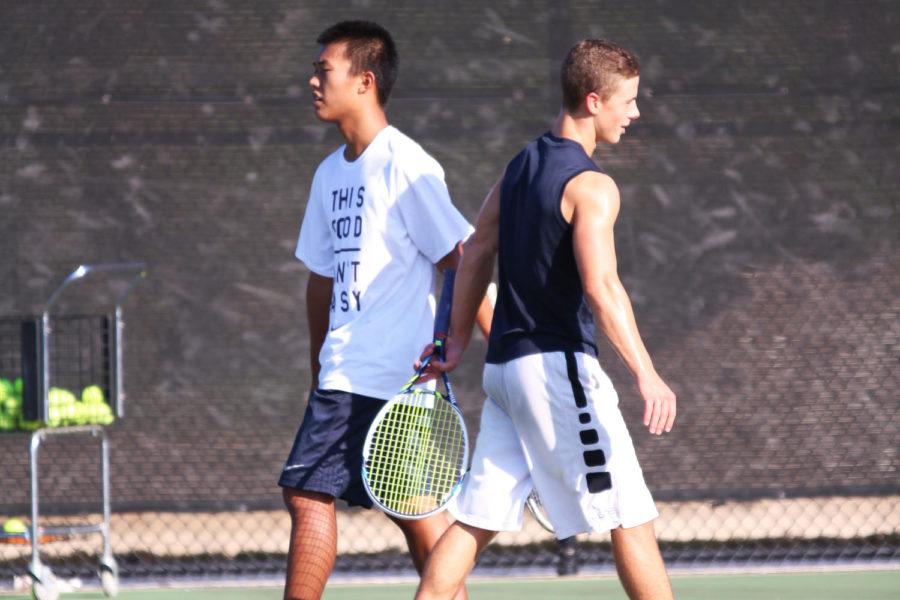 Juniors Chris Sun and Jack Bennett will compete at Texas A&M this weekend for state doubles.

The tennis team, having advanced two players in juniors Jack Bennett and Chris Sun to state, is set to hit the road on Wednesday, May 17, for the tournament at Texas A&M University.

The team has its opening match at 10:30 a.m. on Thursday, May 18, against Lubbock Monterey, a team that defeated the duo earlier in the spring in Abilene.

“We’re really hoping to win that first match,” head coach Adam Cherry said. “They beat us pretty bad in Abilene, but we’re hoping to advance. If we win that quarterfinal match, we’re  guaranteed a medal, as both teams that lose in the semis get a third place medal.”

If the team defeats Lubbock Monterey, they’ll play in the state semifinal at 3:30 p.m., and if they win the semifinal, they’ll advance to the final at 10 a.m. that Friday, May 19.

“I expect us to play as calm and loose as possible, just pure excitement and belief that we can win,” Sun said. “Our first match is against one of the toughest teams in the group, so it’ll definitely be a fight.”

Securing a spot in the state tournament has brought changes to typical practices.

Advancing to state is something the players don’t take for granted.

“It’s really a dream come true,” Bennett said. “It’s awesome to have all the hard work pay off. I expect to go out there and have fun. It’s going to be a great experience no matter how far we get.”