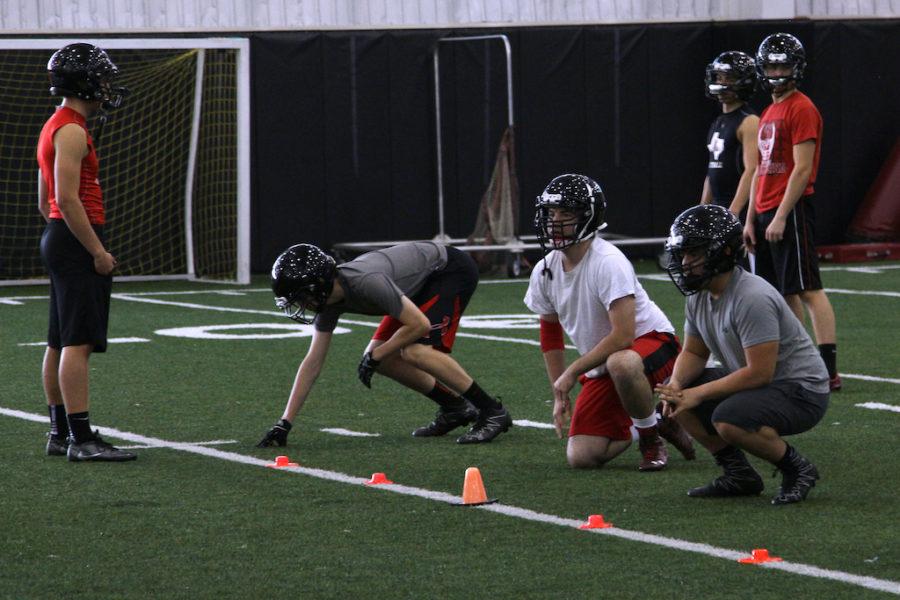 The offensive line practices their stances during morning practice.

The new-look Leopard football team will play in the annual spring scrimmage on Saturday starting at 9 a.m. in the stadium as players will look to further define their roles for the future and improve on the team’s 2-5 district finish from last season.

The spring game is an opportunity for competition within the team, as different strings of players will each get a chance to compete.

“The scrimmage is supposed to emulate a real game,” junior cornerback Dalton Lindelof said. “All of the different strings will play at different times against various teammates. It gives an opportunity for each player to showcase his abilities and prove they can consistently compete against different lineups.”

Junior defensive end Griffin Hunt said it will be an excellent opportunity for experimentation and showcasing talent.

“We’ll get to see some new players compete and determine what plays may or may not work,” Hunt said. “I really look forward to competing against my fellow teammates in front of the community. Hopefully it will draw even more people to support us throughout the entire season.”

In spring practices, head coach Todd Ford has been striving to emulate in-game scenarios, as well as put emphasis on physical training for both the scrimmage and the upcoming season.

“The players have been involved in some weight training so we’re at our best physically,” Ford said. “A large part of our spring training has involved these in-game scenarios so we’re prepared for various schemes throughout the year.”

Ford said he has been impressed by the team as a collective through the training, citing their unity and work ethic as promising attributes.

“I don’t like singling out players as difference makers because this is a team sport,” Ford said. “The team in its entirety has looked great thus far with their effort. Our upperclassmen have been fantastic in bringing guys together, but I’ve been very pleased with how the freshmen have handled everything as well.”

Aside from establishing a set of philosophical goals, Ford has his eyes set on the Tom Landry Classic as well as the transition into 15-5A district play.

“Our first step of the season is a Saturday night game against Argyle,” Ford said. “They’re a great team and our hopes are that the springtime has prepared us. Beyond that, we have our eyes set on a district championship which begins with Highland Park.”

For Ford, performing at a high level each and every day has influence on players’ roles.

“Every time you walk into the facility, evaluation is taking place,” Ford said. “I’d be lying to you if I said how players perform in the spring game and other practices doesn’t influence the role they occupy next year. Those players that aren’t buying into our vision may find themselves in a spot they don’t want to be in.”