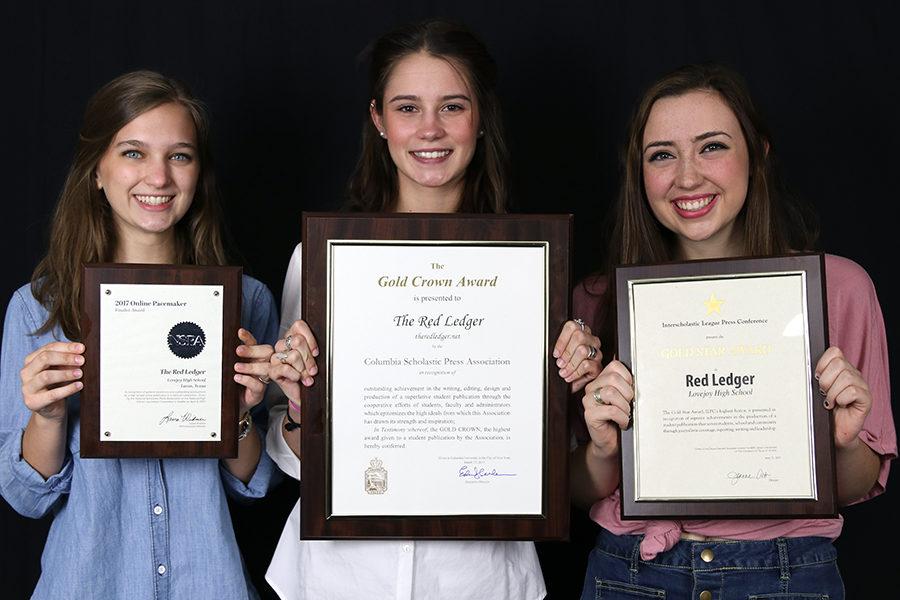 The Red Ledger received multiple state-level awards individually and collectively last weekend at the Interscholastic League Press Conference state convention in Austin. Of the 28 categories in the 5A-1 division of the ILPC individual achievement awards that the staff entered, students placed first in 21, placed second in 13, third in four, and won five honorable mentions.

“I love the fact that so many things get recognized, and I’m blown away by the quality work and the number of awards that we win,” adviser Corey Hale said. “I’m never surprised that we win awards, but I’m sometimes overwhelmed by how many things we win.”

“Considering we won three national awards, and we’re recognized as finalists for another national award, The Pacemaker, it’s a pretty huge deal,” senior and editor-in-chief Jillian Sanders said. “We’re one of the best newspapers out of 11 that were chosen as finalists, and that’s a huge deal, because there are probably thousands of newspapers in the country, so it’s pretty honorable.”

Two newspaper staff members, juniors Nick Smith and Hannah Ortega, were awarded the ILPC Tops In Texas awards for the top online story in the state in the categories of Sports News Writing and Feature Writing, respectively.

The staff has also won a number of other national, local and statewide individual awards this year, totaling more than 100 individual winners. Additionally, Smith and Ortega, along with junior Parker Nolan and freshman Kelsey Carroll have qualified for the UIL all-state journalism staff.

Senior Hallie Fischer has been an editor-in-chief for four years, and has seen The Red Ledger rise under her and her fellow editors’ command.

“It’s come a long way especially over my four years,” Fischer said. “I’m really proud of our staff and especially my editing staff that’s been there with me the whole way. I was just really proud of how we’ve grown The Red Ledger to be our own.”

“Obviously, we don’t do what we do for the awards; we do it because we want to be a good news site, and have a good product,” Smith said. “So, regardless of rewards we’re still gonna work really hard. It is nice to get that credit sometimes, and to get that recognition for all your hard work.”

While Hale is not surprised that the newspaper won some awards, he appreciates the recognition that awards give the staff.

“Here you have [judges] who don’t know you, don’t know your students, don’t know your school, but they are coming from the national and the state and the local level, professionals saying, ‘Man, you guys do really good work,’” Hale said. “I think it helps get [the staff] excited about the stuff that they do every year.”