One Act Play shoots for state 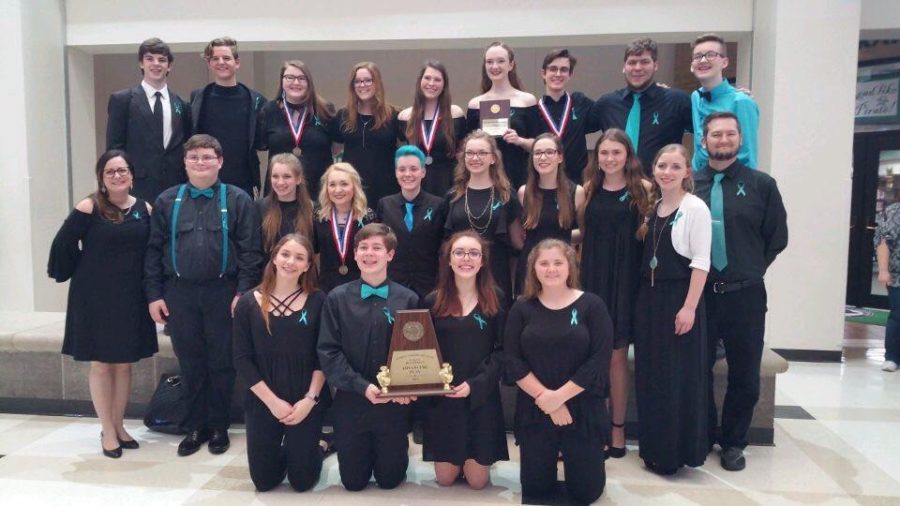 The company of the One Act Play will be competing at the area competition on Saturday, April 1 with their production of "Wit" by Margaret Edson. During the awards ceremony after competition, cast and crew wear teal in awareness of ovarian cancer, a major theme in the play.

Each year, the theatre department prepares a show for the UIL One Act Play competition. This year, the show is “Wit” by Margaret Edson. There are five rounds of competition: district, bi-district, area, region, and state. “Wit” has already competed in both district and bi-district, placing first in both rounds. They will compete again at the area competition this Saturday, April 1, at Plano West High School in hopes of advancing to region.

“Competition is such a different experience than any other show day just because everyone is so professional, and we’re all acting like adults trying to achieve our goal of advancing together as a team,” senior and actress Abby Yeager said.

While the One Act company does not begin competing until the spring semester, the process begins much earlier for those involved. The first step is picking a show that is well-suited for the current talent in the program, and will be successful throughout the different stages of competition. Students read several different plays before settling on this years’ show, “Wit.”

“As she goes through her cycles of treatment she starts to kind of reflect on her life  and what was important to her,” Doyle said. “We the audience see this happen through various flashbacks of when she was child to when she was a student to when she was a professor in her class.”

As her cancer is very severe and progressed, Dr. Bearing undergoes an experimental chemotherapeutic treatment consisting of eight rounds at the full dose. This is something that has never before been done, and Dr. Bearing ends up breaking the record. Senior Rachel Bradley portrays the character of Dr. Bearing.

“She’s a very proud, very intelligent woman, and through the process of the show she learns that intelligence isn’t everything, and that human interaction and kindness is a very important thing to have in addition to knowledge,” Bradley said.

The One Act company had to edit and cut down the original script so that it could fit into the strict 40-minute limit that UIL requires. Plays running longer than 40 minutes are disqualified from the competition.

“You start with cutting which is we all sit around a table and we read through the entire script and we decide what we want to keep and what we want to get rid of,” sophomore and technician Claudia Campbell said.

After cutting the show, the rehearsal process begins. Cast and crew rehearse each day after school, as well as on Saturdays and during Spring Break. The rehearsals are necessary in order to have a strong show and do well in the competition.

“That’s simply what comes down to it,” Campbell said. “A good show is more prepared, is better, has a better script, and just has better acting.”

The ultimate end goal for the company is to advance all the way to the state competition, as the department has not competed at the state level since 2013. For students involved, however, being a member of the One Act Play is about more than doing well at competition. Many claim this show as the best part of their year, and the source of some of their closest friendships.

“I’ve done One Act all four years of high school, and it’s been, hands down, the best experience in my high school career,” senior and actress Morgan Riddle said. “There’s just something different about One Act. It’s a whole new level of dedication. Everyone in it cares so much about it, and everyone is working together to create something that you can be proud of. It’s just amazing because you make the greatest friendships.”