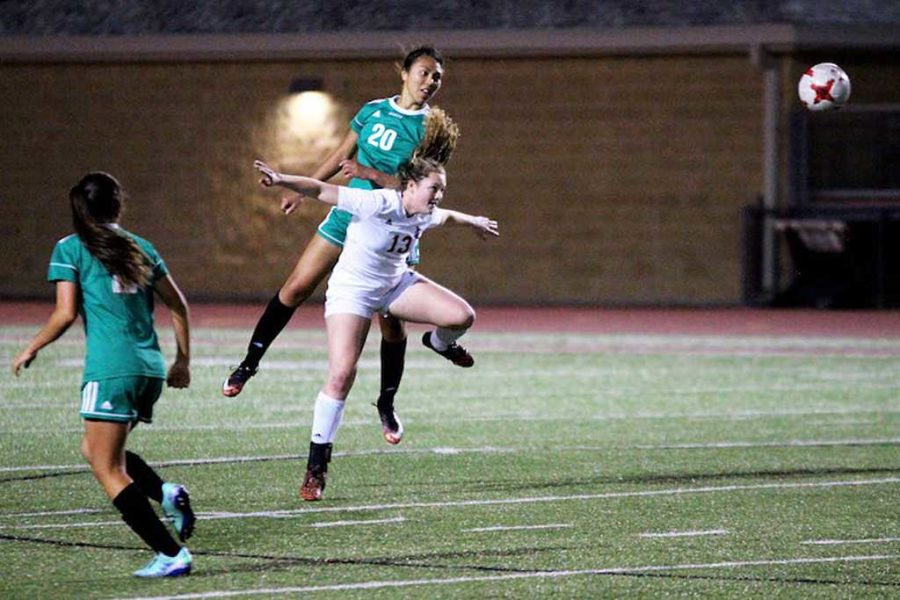 Junior Taylor Thompson heads the ball away from the defender.

The 2016-17 girls soccer team’s season has reached its end, finishing with a 3-15 record on the season (6th in District 15-5A). Though the outcome wasn’t quite in accordance with the team’s initial aims, particular moments throughout the season demonstrated untapped potential.

For head coach John Baker, a highlight of the year was the second matchup against Highland Park, a 1-1 game until the final three minutes.

“We had a very depleted team at that point with girls missing for various reasons,” Baker said. “We were probably playing the best team in the state and were the first team to score on them all year. The total effort and sacrifices they made said a lot about that group of girls.”

Senior Natalie Frauenheim was able to uphold pride in the midst of an underwhelming season.

“My original expectations were much higher than what we achieved,” Frauenheim said. “It’s hard to have confidence when we were down so many players, but I’m proud of the work we put in despite our losses.”

Frauenheim said injuries were a root cause of the team’s struggles, losing five prime starters for the majority of the season.

“Plans we had in the offseason no longer worked because we were missing pieces to the puzzle,” Frauenheim said. “Others were forced to sit out due to minor injury or absences in general. With our full roster the season could have played out much differently.”

Similarly, Baker said those injuries were a hurdle that could not be conquered, losing eight of the team’s 11 starters at one point in the season.

“That was something that we weren’t able to overcome,” Baker said. “We had about four crucial injuries in a seven-day span. We recovered in terms of continuing our fight, but to lose an important chunk of the team was really tough on us.”

For Baker, next season’s roster holds potential to make a lot of noise, with notable players like junior Taylor Thompson and sophomore Lizzie Weichel.

“I’m expecting a lot from those girls,” Baker said. “The girls returning from injury should have positive implications for our team as well, and we have a talented freshman class coming in next year that will join an already young core.”

Baker’s goal for the team next year is one of principle, rather than establishing concrete objectives.

Senior Abby Bryant leaves behind a piece of advice for future players.

“Working on team chemistry before the season ever starts is crucial,” Bryant said. “Having that relationship with your teammates from the jump can make a world of difference.”