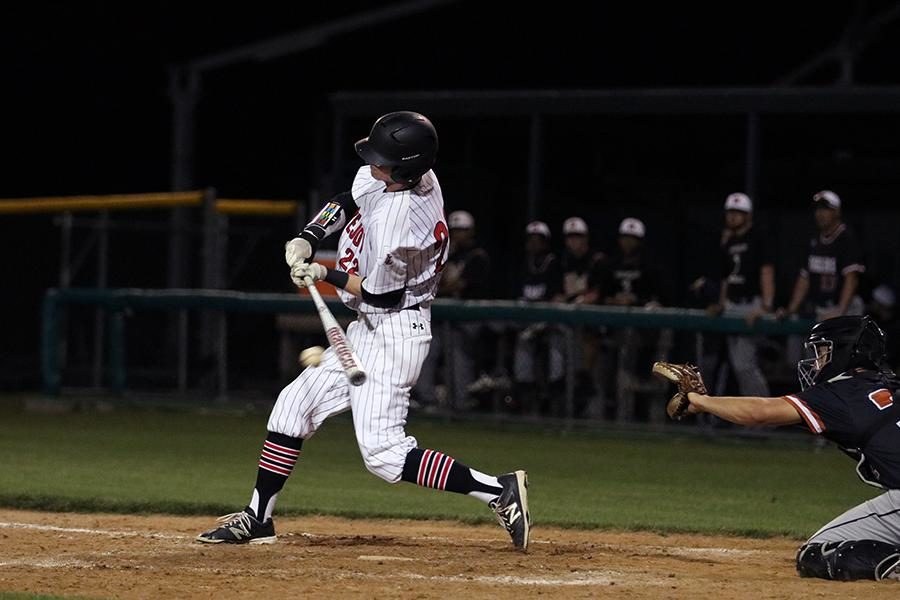 Senior Will Nopper makes contact with a pitch against West Mesquite on Tuesday.

With two wins in a row to improve the district record  to 2-1, the boys baseball team looks to use their momentum to beat West Mesquite (0-3) on the road Friday, March 24, at 4 p.m.

“We just got to come back out and stay focus in our practices,” senior Brandon Merrill said. “As a team, just work on offense, that way we can put up runs early in the game and not wait till their pitchers hit a wall. Our pitchers just go out there and attack and command everything to get outs.”

Senior Will Nopper had an RBI single to give the Leopards the lead last Tuesday against the Wranglers, and from there the offense began to click in the bottom of the 6th where they had 9 runs.

“Putting the ball in play worked well last night,” sophomore Michael DiFiore said. “Defensively they’re not good so if we just hit the ball at them they’ll make their own errors.”

While the team had a big win, the players still look to improve for upcoming games.

“Our main issue right now is getting the ball out of the air,” senior Dane Locklear said. “Just trying to hit base hits through holes and keep it on the ground more. Another thing is West Mesquite isn’t good at hitting so we need to limit our walks and just throw strikes.”

The Leopards look to use Friday’s game as a tune-up for Forney (3-0), the opponent for next week.

“West Mesquite isn’t as good as Forney,” Locklear said. “So seeing what mistakes we’re making against West Mesquite will allow us to know what needs to be fixed now, so that it won’t happen against Forney.”

Last Friday the Leopards scored a 3-2 win against Highland Park (2-1). DiFiore said the team’s confidence skyrocketed from the win.

“Beating them when they’ve always made playoffs in almost every sport feels good,” DiFiore said. “It was a big confidence boost and showed that we’re able to play in the next level.”

With the recent success, some players have stood out from others in these past district games.

“Jacob Terwilliger pitched lights out against Highland Park,” Locklear said. “It was just great pitching. Matthew Almy has been clutch in moments where we need him on bunts and hitting. We’ve had some standout players, but all around we’ve all been coming in clutch and playing well.”

The baseball team’s change in attitude this year is reflected in its record, as the team has already beaten last year’s district record (1-13).

“We’re glad that we’re 2-1 since we didn’t know how things were going to play out against Highland Park,” Merrill said. “We just got to show up ready to work every day, and no matter how good of a team, we got to still have the same level of focus and same intensity in all that we do.”