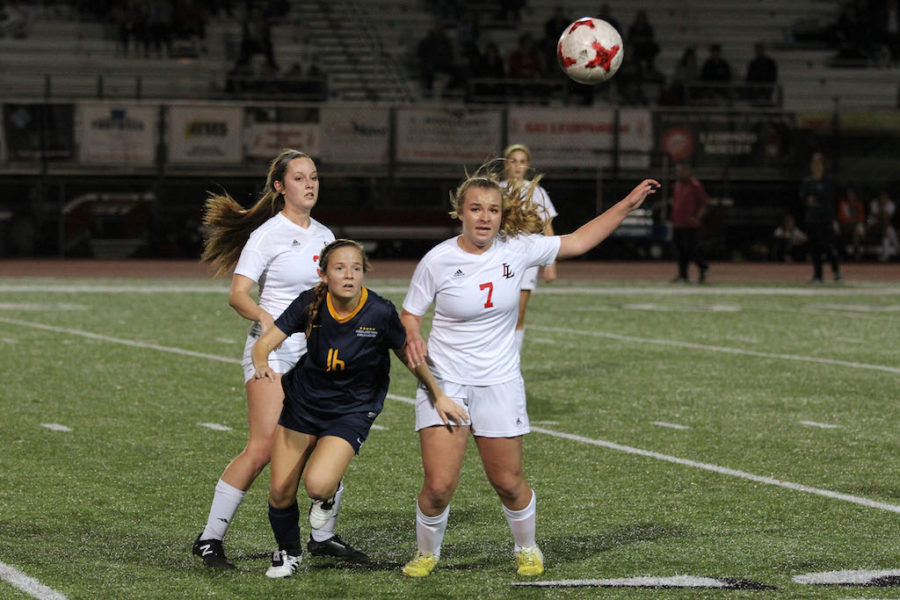 Junior Megan White tries to block out other players so she can retrieve the ball.

The girls soccer team will be carrying a fresh momentum swing as it travels to play Forney tonight at 7 p.m., with hopes to disrupt their opponent’s future playoff position.

“We kind of have a fun role for the rest of the season,” junior Leighton Etchieson said. “We get to be the spoiler and kind of mess up other teams that are trying to go to playoffs. For instance, last year we beat Prosper which took them out of being district champions.”

Losing to Forney by only one goal in their first matchup, senior Carolyn Murad said they will look to capitalize on their mistakes.

“We definitely need to communicate more,” Murad said. “We’ve changed our defense around since then. Jensyn is now in the defense and she has really unified it.”

Beating West Mesquite 3-1 on Tuesday, the team saw what worked for them to be successful.

“Our offense was really good,” sophomore Lizzie Weichel said. “We were able to create chances and put them away. Our midfielders did really well at keeping the ball and moving the ball up to our forwards.”

The girls played Highland Park last Friday, where they turned heads as they were the first team this season to score on the undefeated Scots.

“It definitely lifted our spirits,” Etchieson said. “That was our main goal going into that game and we achieved it. It gave us hope for the rest of the season, especially with all of the injuries we’ve had.”

Weichel said the team looks on this loss differently as they kept the game close against a top ranked opponent.

“Highland Park is really good so the fact that we were able to hold them so close helped with confidence,” Weichel said. “We kept them closer than most other teams have done all season, so it’s made us look better and also feel better moral wise.”

With the loss, Murad said the team now has a positive outlook on the rest of the season.

“By working together we can really achieve anything,” Murad said. “They’re the best team in our district so if we can put one in on them and almost tie it then we can beat anyone.”