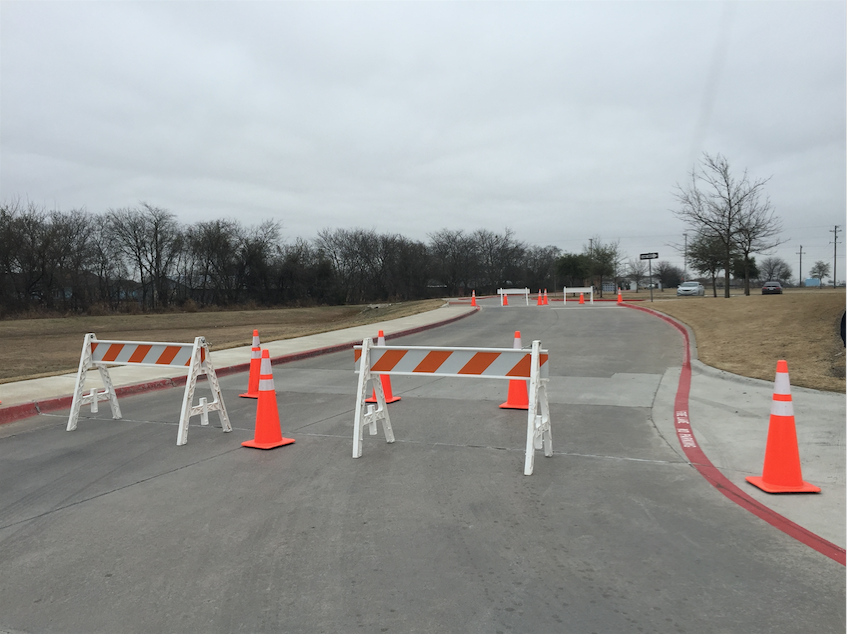 Beginning during a presentation on Jan. 13 of this semester, barricades block the exits of the school during lunch each day. The intention of these barricades are to prevent students from taking an off-campus lunch, with administration citing student safety.

Increased security measures including barricades and a barricade attendant during lunches joined the parking lot patrol officer in his signature golf cart after winter break. Students, many of whom are frustrated by the new security, and their unauthorized off-campus ventures have been cited as the reason for these changes.

Mayfield said the school does not allow off-campus lunch due to the lack of restaurants in the area and the safety of students.

“The opportunity for 250 kids, [half the total number at a lunch], to go off campus, get through [the] line, get their food, not even have a chance to eat but just get there, and get back to be at class on time is just not likely,” Mayfield said. “As a result, it really creates a situation where anybody would be tempted to probably drive faster than they should because they’ve got to get there. At the end of the day, we just said, ‘That’s really not worth student safety to do that, to open that up.’”

Mayfield said if there were a greater number of restaurants in close proximity to the school, administration would “certainly look at that differently.” But for now, he said having an open campus is “really not a situation where that’s a safe option for lunch.” Despite the long-standing decision against off-campus lunch, it was offered to seniors for one day– March 13, 2015– after a schedule change as a trial and incentive.

“What we did was we adjusted fourth period, so students actually missed class time,” Mayfield said. “What we found is students probably need 45 minutes to be able to manage [off-campus lunch].”

“I know that a lot of seniors have off periods or time during the day where they don’t need to be at school for dual credit, so I personally think that students should be allowed to leave school when it makes sense within their day,” senior Zoe Kahana said. “I also personally would like to have an off-campus lunch, especially being a senior.”

Though some sneak off during lunch, there are students, such as those in the Certified Nursing Assistant program or Ready, Set, Teach, who are actually required by their courses to leave campus. With the security measures in place, these students have to check in with the parking lot patrol officer. Though it can be tedious, junior Emma Overholt said she hasn’t encountered any major problems with the routine check-out.

“When leaving for our Ready, Set, Teach internship, [junior] Lindsey [Hammond] and I have to check in with the parking lot monitor when leaving the high school,” Overholt said. “After a couple days, he knew us by name, so it doesn’t cause too much trouble when we leave campus.”

These new security measures will be in place for the remainder of the year, though they are subject to change for next year.

“We always reevaluate year by year and kind of look and go, ‘Ok, is that what we need to do again next year, is there a different way or a better way to manage those same things?’” Mayfield said. “It’s going to continue, what we’ve got, and it’s going to continue through the rest of the school year. But [we’ll] reevaluate and say, ‘Is there a better way to do it?’ We’ll always look for that.”