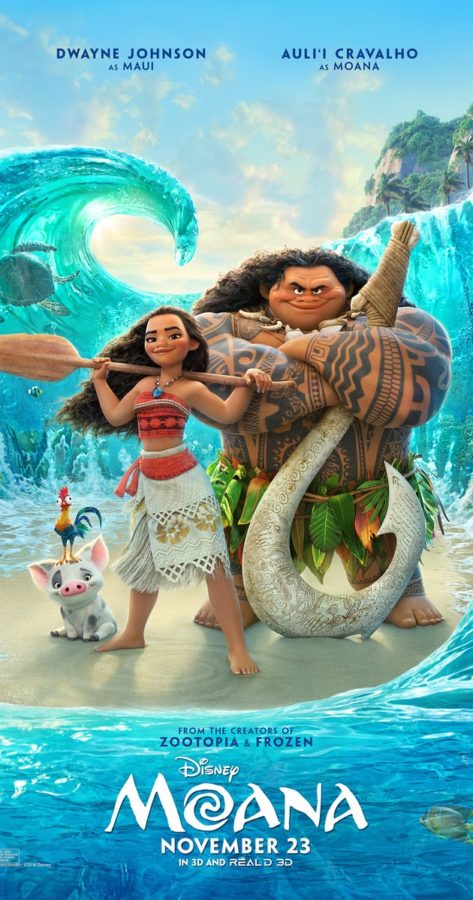 Over the past few years, Walt Disney Animation Studios has gone through a renaissance of sorts, with a string of critical and commercial hits such as “Tangled” and “Zootopia” that’s put them on the same footing as animation powerhouse and sister studio Pixar. “Moana,” their most recent feature, keeps this streak of successes alive through its excellent musical numbers, beautiful animation, and exciting performances from Dwayne Johnson and newcomer Auli’i Cravalho.

The film follows Moana (Auli’i Cravalho), the daughter of a powerful chief, as she sets off on an adventure to restore her island to its previous glory. Along the way, she meets cocky demigod Maui (played excellently by Dwayne Johnson), who agrees to help her in her quest. Both of the lead performances are wonderful, as Johnson is a perfect fit for the role, and brings a humorous and exciting energy to the role.

The first thing that’s notable about the film is the improvement in animation. While previous Disney animated films like “Frozen” featured generic-looking settings and characters, “Moana’s” distinct island setting and emphasis on elements of traditional Polynesian culture allows it to visually stand out from other animated features. It’s about as good as 3D animation can get, and the occasional detour it takes into hand-drawn animation serves it well, creating a unique blend like nothing else out at the moment.

The music stands out as well, thanks to contributions from Lin-Manuel Miranda of “Hamilton” fame. The songs are surprisingly catchy and well-written, and are nearly as memorable as classic Disney songs from movies like “The Lion King” and “Beauty and The Beast.”

But it’s not without its flaws either. For one thing, the plot is familiar, a hero’s journey with elements reminiscent of “The Lord of the Rings” and “The Odyssey,” and it also overstays its welcome by about 15 minutes; the third act, in particular, being a bit exhausting. The film also occasionally stumbles into cliches such as the animal sidekick, and some of the dialogue is incredibly stale with a few jokes not completely landing.

Despite these flaws, it’s still a good, enjoyable family movie, and compared to other, somewhat overrated, recent Disney flicks such as “Frozen and “Zootopia,” “Moana” is an absolute triumph. It may not be a perfect film, but it’s certainly an important one, finally allowing a culture under-represented in media to get a chance in the spotlight.