Over the net, over the pond

Volleyball players travel to Europe over break with club team 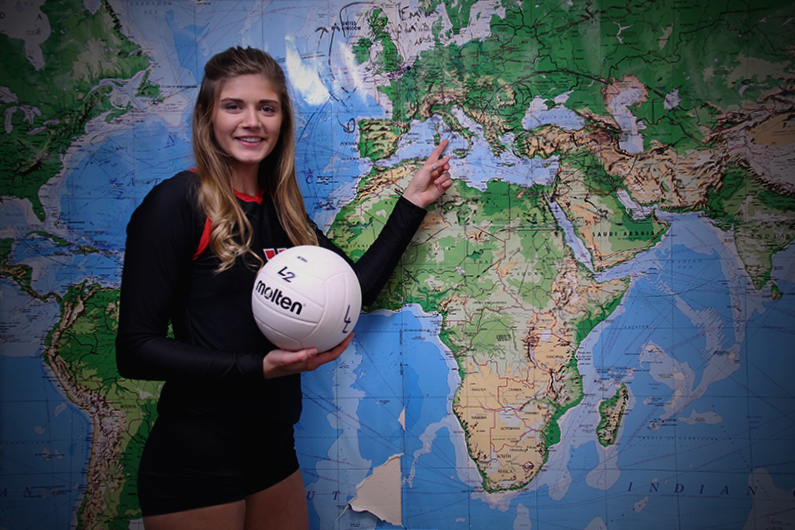 It isn’t often that sports takes high school students into an entirely different continent. For senior volleyball player Bailey Downing, who has committed to play middle blocker at Utah State, her club team has been granted the opportunity to travel to Europe to play the sport she loves. On Dec. 26, she will begin what could become a trip of a lifetime.

The offer came to fruition following her club team’s success and the respect that clubs overseas have for her coach.

“My club team has won nationals the past two years, so our coach has built a great name for himself and for our team,” Downing said.

The team will be visiting a variety of places and experiencing different cultures for the duration of their trip.

“We’ll be visiting Prague and Rome,” Downing said. “I don’t know a whole a lot about them, but I’m excited to experience something outside of the United States in a volleyball setting. I’m looking forward most to the sight-seeing and trying all kinds of new food.”

Downing said she is excited for the chance to share the experience with her team.

“I think it will be a great opportunity for our team to grow and start the season with a high level of competition,” Downing said. “They obviously have a lot more experience than us, so it will be fun to compete against them.”

The trip will be Downing’s first to Europe, and she said she thinks it will be a defining moment in her life and volleyball career.

“I have never been to Europe so it will be a good way to learn about other cultures and experiencing life outside the states,” Downing said. “To play overseas is a rare opportunity so it will be something I can take with me the rest of my life. I think it will also help our team by being able to experience it together.”

Senior Lovejoy volleyball player Lexie Smith, who plays on Bailey’s club team, has an idea of what to expect from the competition they will face.

“On December 28th, we’ll face the Olymp Praha Juniors based in the Czech Republic,” Smith said. “They’re a solid junior team that we should beat. On the 29th, we’ll play the Olymp Praha Senior team.  On December 31st we will play NKBM Branik (U22 team based in Maribor), that should also be a very close match.”

Aside from their European competitors, the team will also face a squad from Iran.

“We’ll be meeting the Iran Junior National Team,” Smith said. “We have no clue as to their level, but we will be with them at training camp and will likely spend the entire day with them. We’ll find out more on this later as we are waiting on their visa, but this could be one of the best matches of the tour regardless of their level.

Downing’s high school coach Jason Nicholson is proud of her accomplishments and excited for what the future holds.

“Having coached Bailey for a while now, I’ve seen her work ethic and passion for volleyball,” Nicholson said. “I’m sure that those things translate to her club team as well, and I know they’ve been pretty successful the last couple of years. Hopefully that success translates to European play.”