Students opt out of the traditional education route and decide to take a gap year. 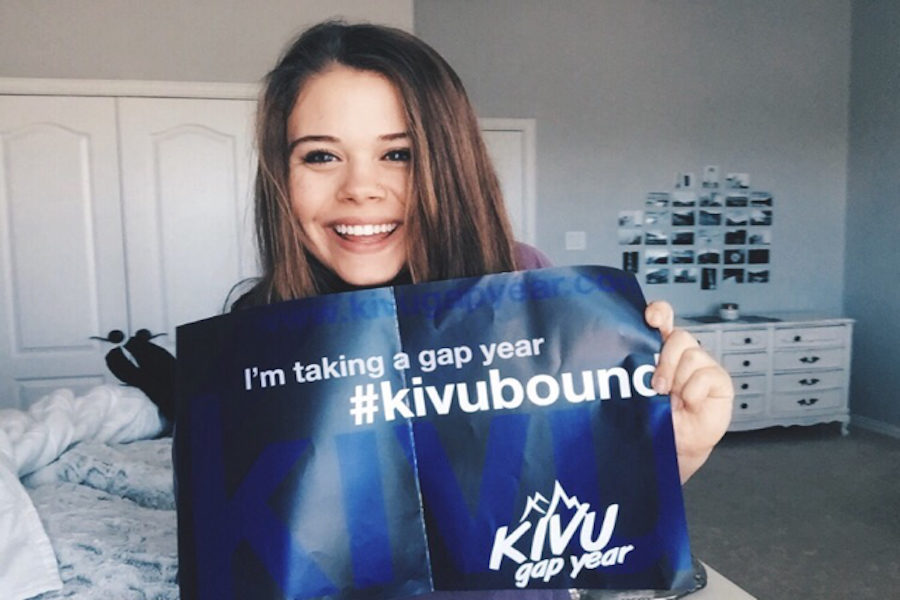 Whether it’s heading to South America to be an intern, or flying up to Vancouver to work with a church ministry, seniors Ellie Stockton and Abby Bryant will be traveling the world next year as they partake in a “gap year” before starting college.

Ellie will be participating in the KIVU Gap Year program, a program where students can explore chosen destinations to learn important values, such as leadership, service, and recognizing other cultures, before tackling college. Stockton will attain up to 900 hours of internships in South America, Africa, and the Middle East after going through a semester of training. Bryant will be staying at Immanuel Baptist Church in Vancouver starting in July to volunteer with any of the church’s ministries and assisting the pastor.

Ellie was influenced to take this opportunity by her parents.

“Well first, I was going to graduate early and do a trip, like one trip to Australia or some other place. But then my parents thought if they were going to pay for something like that, they wanted me to go more in depth with it,” Ellie said. “I just really didn’t know what I wanted to do in college yet, and it kind of gave me a lot of anxiety, so I was just like ‘I kind of just want to take a year to travel and do a bunch of internships.’”

After a semester of training and getting college credits, Ellie will be able to work as an intern for non-profit organizations and missions, along with a group of peers close to her age, students who have either not started college yet or are already in college. The whole experience will be “super refreshing,” Ellie said.

“I think [after] going through four years of high school you’d kind of be burnt out,” Ellie said. “A lot of kids will go into college and just be super unmotivated and are not ready to learn.”

Ellie hopes to gain a new perspective during her gap year and then attend the University of Washington.

“I think I’ll just learn really to love everyone,” Ellie said. “I think I even struggle with that now, just getting to know people and getting to know their backgrounds and their cultures. I feel like I’ll learn a lot from just being around other people and connecting with people.”

“This is kind of one of the very few things she’s set her mind to and has really really shown she wanted,” Anna said. “It’s really cool to see her getting something that she’s wanted for such a long time and worked so hard for.”

While Ellie will work as an intern, Bryant plans on spending her gap year in Vancouver for 10 months.

“One of our good family friends just moved up to Vancouver so I am just working with the church in Vancouver,” Bryant said. “I’m going to partner with [the church] and actually live with them and kind of be the pastor’s right-hand woman, just doing whatever he needs.”

Bryant’s trip serves as a way for her to follow in her family’s footsteps.

“So in fifth grade my second oldest brother actually took a gap year and did some mission work in Hungary, and so from then on I was really interested in it, and I knew that that was something I wanted to be a part of,” Bryant said. “The Lord has directed my passions and the kind of people I’m around, so he just opened up an opportunity for me in Vancouver and so that’s just where I’m going.”

Bryant will be interacting with college students while at Immanuel Baptist Church, as well as serving in any ways she can.

“I’ll just be helping out with little ministries where kids need to be watched so that [the pastor] and his wife can partake in women’s ministries and stuff like that,” Bryant said. “Just little tasks that I need to get done for him just to make his job as a pastor easier.”

After returning from Vancouver in May, Bryant hopes to go to college at Texas A&M University after having the chance to “figure out who [she is] as an individual.”

“I would say I’m pretty confident with myself, but even to have that time to be pushed so far out of my comfort zone into completely different culture is an opportunity that you really won’t ever have again,” Bryant said. “Even after college, you just have to go straight into a job, and even studying abroad is just not quite the same. I think it’s just better to go dive in deep straight out of high school.”