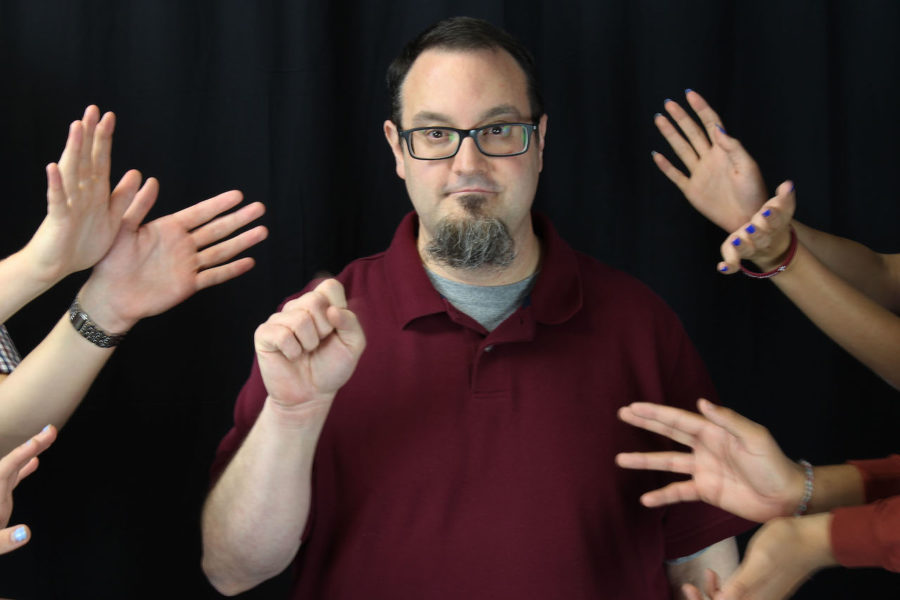 American Sign Language teacher Edward Bart is deaf. Bart studied at the Rochester Institute of Technology in New York and the University of Texas at Arlington before beginning his career as a teacher.

The chairs in room B110 are arranged in a circle. Just a few desks are scattered along the walls. Humorous posters border the room, and light peeks through blinded windows. Silence sweeps over the room as seats are taken, but the conversation is just starting. American Sign Language teacher Edward Bart’s warm welcome makes it easy to forget what was once new.

Freshman Elle Mendelson said her classmates were “horrified” on the first day of school. The students sat quietly in fear of what was to be expected from students of a deaf teacher, but when he raised his hands, Mendelson said the students were calmed by his approach.

“I think all of us in our class must have been relieved the first few classes that we had with him because he will make jokes, and he sees the positive side of things rather than the negative,” Mendelson said. “There’s a warm, comforting peacefulness to him, but at the same time it’s very clear he is passionate about what he does.”

However, Bart’s childhood dream was not to teach students, and his path to the present has turned many directions.

As a child, Bart’s communication difference with most students in his school created many social challenges in his interactions to the hearing students around him. There were only two schools with deaf education programs, and they were not on the same “track” as each other, forcing Bart to attend a separate school from his classmates. Along with that, he coped with limited communication to peers and teachers. His family tried to help him to find a place in the school.

“I was lucky that my parents and other parents fought. They were like ‘That doesn’t make any sense,’” Bart said through interpreter Brittany Walker. “I want[ed] to go with my class, my ninth grade graduating class. I want[ed] to go with the same people. For my elementary school friends, I haven’t really seen them again, but you see the same people every day because you go to the same school all the time.”

Upon his family’s request, the district moved the deaf education program the summer before ninth grade so that he could enter Martin High School with his classmates. As Bart advanced in grade school, he was “mainstreamed,” or immersed in hearing classes with the assistance of an interpreter.

Bart planned to attend Baylor University, but changed his mind after visiting the school.

“I asked them about how many deaf students were at at that university. They said maybe five to eight students,” Bart said. “I looked at that, and I was tired of being the only deaf in an area full of hearing people, so I changed my plan.”

After graduation in 1995, Bart attended the National Technical Institute for the Deaf at the Rochester Institute of Technology in New York. With over 3,000 deaf students, the communication barrier Bart had experienced his whole life vanished. He described Rochester as “fantastic,” “amazing” and “the best decision of [his] life.”

“I felt normal. I felt I could meet someone new,” Bart said. “You know, the first thing [hearing people] talk about is that you can’t hear, but up there, I learned how to advocate for myself. Who I am, who I am not. Those are things that I could learn up there: my self identity.”

There’s a poster hanging in Bart’s classroom with a statement that is overlooked by most, but deeply meaningful to him: “It’s not hearing loss, it’s deaf gain.”

“[Rochester] really helped me learn what it meant to be deaf as opposed to being ‘hearing impaired’ because that’s the only thing that I had to compare my life to when I was around hearing people,” Bart said. “So when you compare yourself to that, you have a bad image of yourself.”

After Rochester, Bart returned to Texas intending to major in film, a childhood passion, at the University of Texas at Arlington.

“I noticed that it really wasn’t a good match for me, and I wasn’t as passionate as I used to be or as passionate as I saw the other students were,” Bart said. “Also, a big part of it was that business is already very difficult to get into. It’s two to three times as hard for a deaf person.”

Bart left his digital dream and enrolled at UTA to receive his master’s in English, leading to beginning his teaching career in 2006. He has returned to a hearing high school, but this time as a teacher.

Bart teaches the ASL classes with interpreter Brittany Walker assisting, though she does not interfere with the class. She is on hand for Bart’s assistance.

“If there is miscommunication, typically that’ll be pretty obvious,” Walker said. “If the student is needing to have communication with him, either they can write back and forth, or if he decides that he wants an interpreter for the student, then I would come into play.”

Bart said he doesn’t have close relationships with co-workers other than those in the language hall with him because others often don’t know how to converse with deaf people. However, Mendelson said it just took a little time to get used to it.

“When we, as hearing people, think of the deaf, we think of it almost as a disability, and he shows us that it’s nothing like that,” Mendelson said. “It’s absolutely something you can live with, it’s just different.”

A year or two ago, Bart watched Nathie Marbury’s autobiographical DVD “No Hand Me Downs” for research. He began to become “engrossed and interested in her life.” He discovered that she had taught at Austin Community College and wished to reach out to her, but later found out online that she had died from cancer five years prior.

“I could’ve met her, and that was a regret that I never really got to meet her and go in to see her before I actually learned about and researched her,” Bart said. “I wanted to talk to her and have conversation.”

Bart brings all of his experiences, good or bad, to help his students understand not just sign language, but what it means to use it. With his personal experience, he is able to provide ASL history hard to find on the internet, as well as a firsthand glimpse into the deaf community.

“We get to experience [the deaf community] every day,” Mendelson said. “It’s such a great opportunity, and not very many people get to learn from a deaf man and get to hear his experiences. We really experience how to communicate rather than just the physical language.”

Bart said his main goal is to “expose people to new perspectives and new ideas that they havn’t seen and to let them see there’s more than one way to see the world.”

For students walking into B110 in August wishing to learn a new language, they walk out knowing a new world.

“A huge thing that he’s taught us is that deaf doesn’t mean worse or less normal,” Mendelson said. “[He] really has opened my eyes to realize that for the people who have those disabilities, it’s not a disability. They can do everything they want to if they choose to. It’s a matter of their mindset. If their mind is in a positive place, and they tell themselves that they can succeed, I really believe that they can just as well as anyone else.”