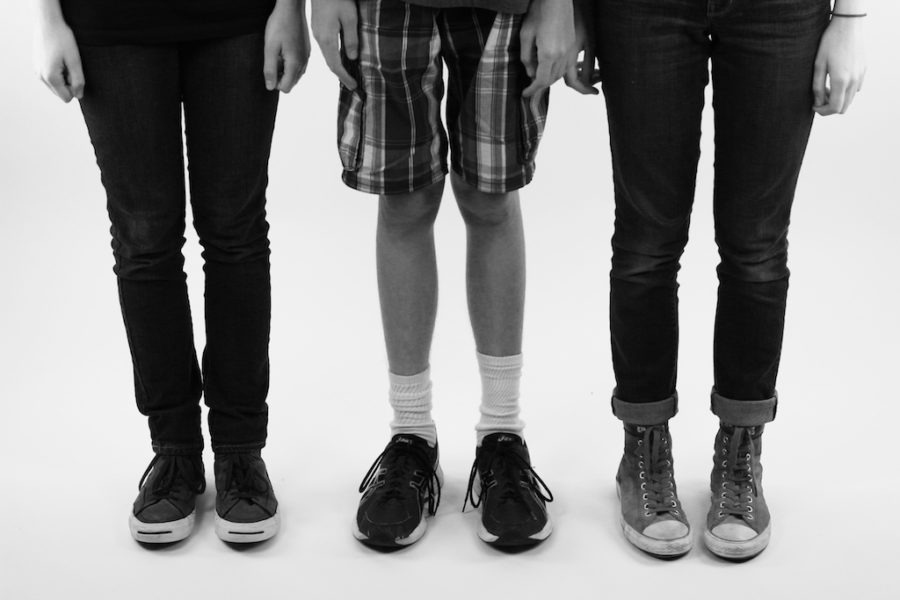 Freshmen students Kelsey, Ian and Jackie Carroll are triplets who are often referred to as simply, "the triplets." As kids, they were indistinguishable in their baseball uniforms.

After a long hard look on the Allen Parks and Recreation online catalog, “T-Ball” appeared at the end of an exhaustive search for sports. My parents smiled, as they’d found the perfect option for their kindergarten-age triplets.

Flash forward a few months, and the Cubs T-Ball team, comprised of a dozen 6-year-olds who have never set foot on a baseball diamond, started playing weekly games. Every Saturday morning, our family’s Honda Odyssey pulled out of the garage filled with three hyper children, or one-fourth of the team, a stockpile of water bottles, sunscreen, and an excessive amount of orange slices.

My brother, Ian, my sister, Jackie, and I raced onto the field each week dressed in our identical blue jerseys, white pants, black striped socks and black cleats. Under our too-big-for-our-heads baseball caps, we basically looked like the same person. Three little clones rotating on and off the field, trying to play the perfect five-inning game.

Most innings finished when the five-run limit was reached, which led to many games ending in a tie, but being the kids we were, the end of the game just meant it was time for snacking. After each getting passed orange slices and a juice box, we gobbled them down and shoved the rinds into our mouths, smiling at each other with giant orange grins.

We smiled many times while playing together, but unlike the red dirt stains still on the floormats of our Honda, the smiles quickly faded. Those “too-big-for-our-heads” baseball caps stayed perched, metaphorically, on our heads all the way through elementary, middle, and now high school, labeling us as “the triplets.”

It’s not that I don’t like being called one of “the triplets.” It’s what makes those few moments when I’m recognized as an individual even more precious. All three of us have created our unique personalities, and being one of “the triplets” is just one of the many characteristics that define us.

Transforming from a trio into three individuals didn’t happen until we arrived at high school. The previous eight years of schooling in the district were spent surrounded by the same people year in and year out. Being introduced to three other grade levels full of students who I’d never seen before at the high school gave all three of us a chance to wipe the slate clean and introduce ourselves as ourselves. Ian fit in with the robotics-math-engineering crowd, and is taking a robotics class to further his skills. Jackie is taking robotics as well, but she’s in the “I’m-taking-robotics-because-I-like-it-but-I-really-don’t-know-what-I-want-to-do-in-high-school-yet” phase.

I decided on becoming a part of The Red Ledger staff, which went completely against my siblings’ choices when it came to electives. That’s where I am as I’m writing this column, sitting down in the newspaper room in front of my computer. If it weren’t for this column, almost nobody on the newspaper staff would know I even had siblings.

Although it may sound bad to say “ I don’t want the staffers to know about Ian and Jackie,” it’s somewhat true. Newspaper is the one class where I’m seen as myself, “Kelsey, freshman staffer,” instead of “Kelsey, one of the Carrolls.” That’s probably the same way my siblings feel in their own electives as well.

Being a triplet has taught me a lot: how to be responsive to three different names, share almost all my belongings, and how to withstand being poked in the arm for five minutes without having the urge to punch whatever sibling is doing the poking.

But in the grand scheme of things, I learned that being an individual doesn’t mean isolating myself. Being an individual means I created my own personality, while still being part of my trio. Whether it’s wanting to all sit at the same table in human geography on the first week of school, rocking out to Guitar Hero on the Wii together every time we have the chance, or even having to take the awkward pictures that accompany this story, our baseball caps, although not physically, will always sit on our heads, connecting us through our one shared memory: kindergarten T-ball.