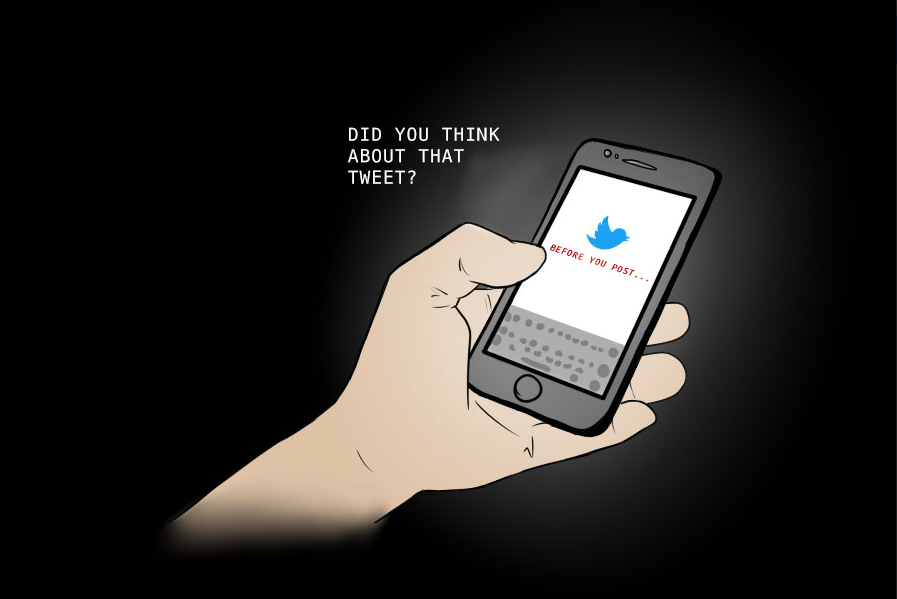 The soft, artificial glow of millions of screens across the country. Thumbs typing hastily, quickly, obsessively. Digital words exchanged, stored in satellites and servers and on countless other screens. So many things to see, share, retweet, like, comment, favorite.

With so much to see, it is inevitable that at least one tweet amidst the stream of digital content will irritate at least one person. That one person may take things too far and lash out bitterly in front of the entire watching web.

Others respond. A digital fight ensues. Words are exchanged that never would be said in person. Typing occurs instinctively, without second thought or consideration.

Unfortunately, as Twitter has become remarkably popular, with 56 percent of teens going online several times a day, being kind is often forgotten as the popularity of censoring one’s thoughts and words has plummeted. While it can be a good thing that Twitter allows for such rapid exchange of ideas, it is truly horrific that many people no longer think before they type and inevitably send. Gone too, because of the relative anonymity a screen provides, is the remembrance that the users people attack on social media have emotions, beliefs, and sensitivities. It is a sad notion that screens are so capable of disconnecting humanity with compassion.

The thing is, it’s perfectly OK to have an opinion. It’s perfectly OK to express that opinion. It’s OK to disagree with others’ opinions. But it’s not OK, whether in person or on Twitter, to make other people feel below respect or kindness. No person, no matter how different or incorrect their beliefs may seem to be, deserves to be refused the right of basic human respect.

All too often, both public and private twitter feeds are filled with snide comments, “subtweets,” and personal attacks against other people’s actions or character. A line should be drawn between someone’s opinion, (for example, supporting concealed handguns), and attacking an individual directly (addressing someone rudely and specifically who doesn’t support concealed handguns).  In the past, rudeness was only expressed in real-time. Now, it is capable of being screenshotted, shared, commented upon, liked, and retweeted.

The cliche phrase, “treat others the way you want to be treated,” should come into play online just as often as it does in real interactions, however it is evident that most users largely ignore this social rule while using the internet.

Essentially, if someone attacks you on social media, you should take the moral high ground. Either don’t respond at all, or reply with a mature, level-headed response that ends the conversation respectfully. When someone criticizes who you are or what you represent, don’t act in a way that will give them more cause to be inflammatory. You can stand for what you believe without engaging in caustic, trivial arguments that do more harm than good.