Review: Arrival delivers on its promise of smart, meaningful sci-fi 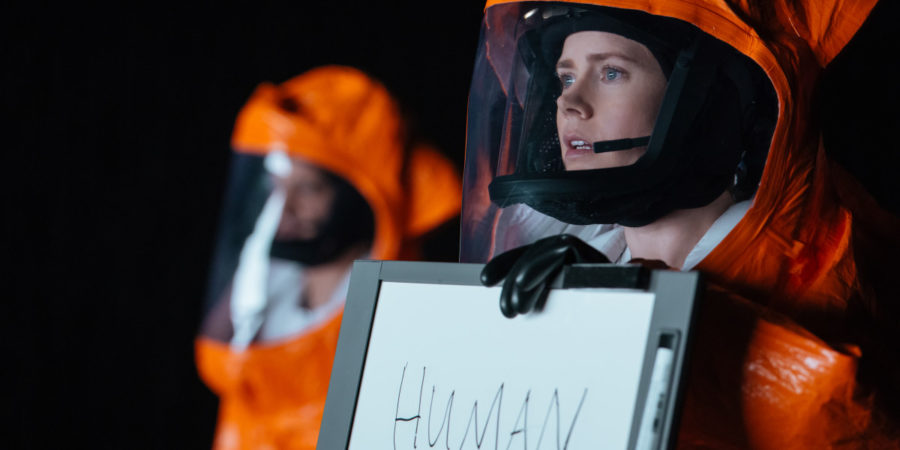 The trend of acclaimed space-themed films being released right at the beginning of awards season, seen in recent years with “Gravity”, “Interstellar”, and “The Martian”, respectively, continues in 2016 with director Denis Villeneuve’s “Arrival,” a film that stands out from the pack for its human element and for not relying on visual effects.

The film follows Louise Banks (subtly but powerfully played by Amy Adams), a linguistics professor who is suddenly recruited by the military to assist in translating messages from alien ships that have appeared in various locations around the globe. She’s assisted by physicist Ian Donnelly (Jeremy Renner) and with his help, they start to analyze patterns in the creature’s communication to find their purpose on Earth.

There’s a scene early in the movie involving Banks’ first entrance into the ship that is utterly awe-inspiring, not because of its stunning visuals, but because of the sense of unease Villeneuve manages to stir up in the viewer by taking his time with the scene, and the pure dread of not knowing what’s going to happen next. After the scene, as the characters are catching their breath, the audience is too. It instantly feels like an important cinematic moment.

While other films dealing with the concept of alien invasion focus on the destruction caused by them, Arrival takes a different approach, one where we are the ones destroying ourselves in the process of coming to terms with such an event. Because of this, it stands out from other effects-driven movies like Independence Day or the Transformers franchise. It doesn’t intend to blow its audience away with impressive action sequences or mass destruction. Rather it poses questions to the audience in an attempt to create a real discussion. It’s the rare sci-fi film where the world isn’t totally at stake, and for that, it’s a relief.

It’s a bold move for Denis Villeneuve, a director less noted for work in the sci-fi genre, with most of his resume consisting of dark, unsettling dramas like “Prisoners” and “Sicario.” Though it’s a new direction for him, the film manages to retain his signature mood while also containing a strong emotional core that stays with the viewer long after the credits roll.

It’s not a flawless film, however, as Jeremy Renner’s performance isn’t nearly as good as Adams. Some of the dialogue falls flat, and there isn’t enough time to allow the supporting characters to fully develop. It doesn’t matter much though, as the film conveys what it’s message in such a powerful, beautiful manner that the viewer can’t help but look past its slight faults.

2016 has been an extremely weak year for film, or at least ones with a purpose greater than to distract the audience for a few hours. Nearly every sequel or hotly anticipated movie has been a complete dud, and the lack of quality original programming at theaters has kept audiences away. Though there have been hidden gems and a few decent films to come out of this year, Arrival is the first truly significant one, and it couldn’t have come at a better time.