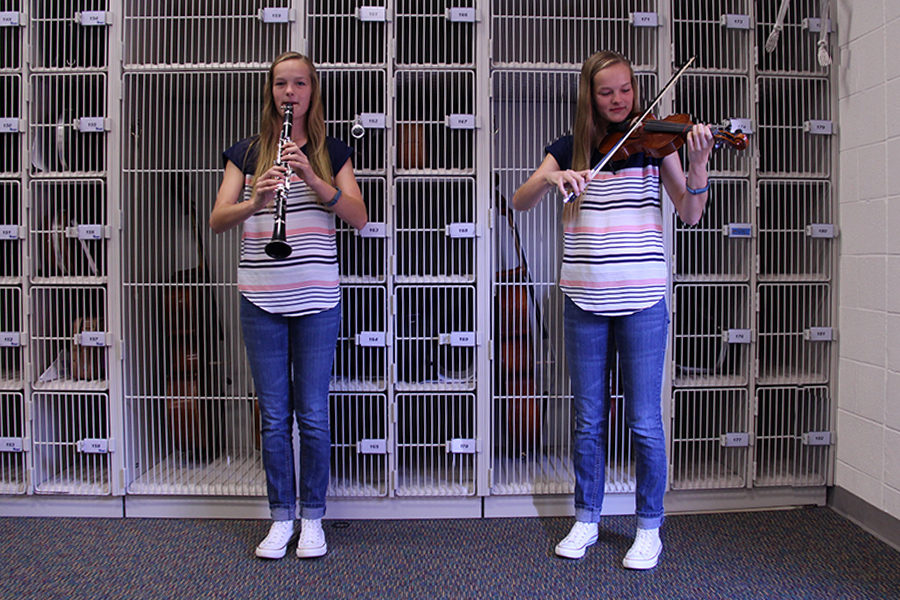 Renée Dobson balances band and orchestra, playing both the violin and the clarinet.

After hearing the bell ring signaling the end of second period, freshman Renée Dobson hurriedly crams her clarinet back into its case and races across the hall to the orchestra room, where she quickly starts tuning her violin before class begins.

Renée Dobson is an active musician in both band and orchestra. Although she “wouldn’t necessarily say ‘pushed,’” Dobson was “introduced” to the violin in first grade. She started playing the violin the July before her sixth grade year, and proceeded to join band at the start of her sixth grade year as a clarinetist. Renée joined orchestra classes on campus in seventh grade, a year after she started band class, and immediately noticed changes.

“In private lessons during sixth grade [for violin], I only saw my private lessons teacher once a week, which meant I only tuned once a week,” Dobson said. “So [in orchestra class], I wasn’t used to tuning every day. [I heard] a lot of new instruments that I’d never heard [in the orchestra]. I knew what they were, but [a difference was] just being able to play a bunch of different melodies [with the other instruments].”

Dobson was compelled to choose band as her fine arts credit in sixth grade because of her two brothers, who both participated in band. Dobson is able to see the truth behind stereotypes in both band and orchestra, and says that it makes her have “stronger opinions about them.”

“I do think there is the mentality of ‘orchadorks’ and ‘band geeks,’” Dobson said. “In band there’s different sections to it, like ‘flutes are this,’ ‘trumpets are that.’ In orchestra, I see it more as ‘oh, they’re an orchadork’, and they’re not categorized as ‘oh, they’re a cello.’”

Dobson said that if she were ever forced to choose between band and orchestra, it would all boil down to the time commitment

“Band is a huge commitment because of marching band, and orchestra is a commitment, but [it is] very relaxed and they like to have fun,” Dobson said. “If I had the time I’d go with band because it has a lot more social events, but it takes a lot of demanding time. But if I didn’t have the time, I’d choose orchestra.”

Playing instruments “creates faster neuron pathways between both sides of the brain,” according to orchestra teacher, Mary Winkler, which “probably [means Renée] does a lot better in classes, too.”

“She’s wonderful. She’s always prepared,” Winkler said. “I think that it takes a very organized person to be able to [play both instruments], especially with marching band and all the practice with both instruments and feeling successful with both.”

Paige Eckard, freshman and close friend of Dobson, holds Dobson in high regard

“She’s a very dedicated student,” Eckard said. “She’s very talented in both [instruments] because of how hard she works to improve her skills.”

Even though she notices differences in both the environment and learning styles of both classes, to Dobson, it all relates.

“Some things I can take from being in orchestra to band and band to orchestra,” Dobson said. “Either different scales, listening, tuning, it’s all kind of intertwined together.”