Man behind the microphone 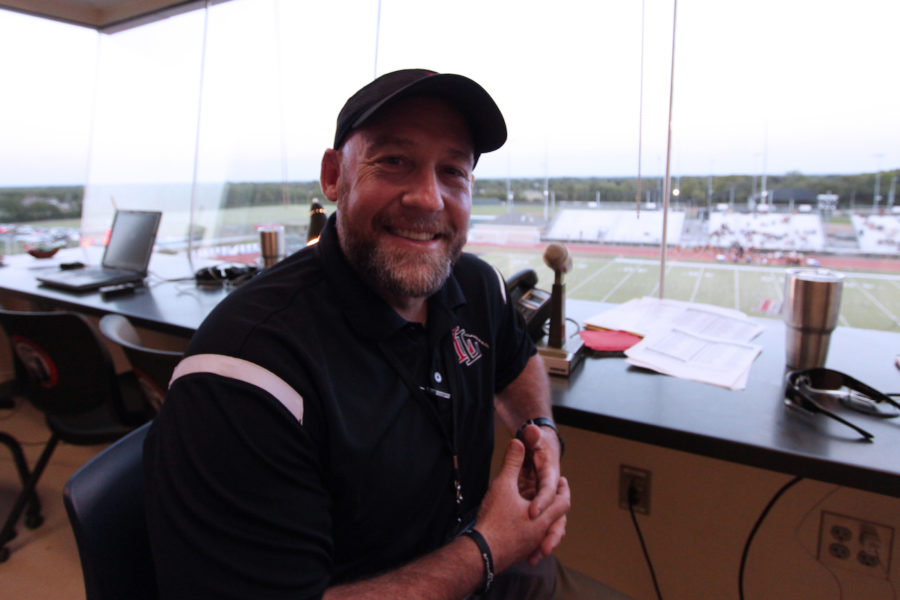 Hastings has been the voice behind the varsity football team for the past nine years.

It’s a chilly Friday night. The football field’s bleachers are packed with a deafening and passionate student section attempting to cheer their team to success. Proud parents and local supporters round out the stadium, all of whom holler for the Leopards with blaring volume. Trumping the chaotic sound is something distinctive that has become a trademark of Leopard football, and it’s been that way for the past eight seasons.

Ian Hastings is the long time PA announcer for the football team. Regular game attendees instantly recognize the booming Texas drawl reminiscent of a spaghetti western film, but they don’t know a lot about the man behind the microphone, who takes messages from his spotters and then relays them to the entire stadium

Once the job opening had presented itself, Hastings jumped on the chance to call a game he loves.

“I am truly passionate about the game of football, especially Texas high school football,” Hastings said. “When the opportunity arose in 2008 to work in the press box, I jumped on the opportunity.”

The PA announcer has several responsibilities in enhancing the crowd’s experience at the game.

“The main job of the PA announcer is to explain the penalties on the field,” Hastings said. “We’re also responsible for identifying the people who make plays on offense and defense and try not to mess up any names.”

An important element of the job, besides being accurate, is appeasing fans and coaches alike.

“It’s important we also make an effort to not be biased and upset the opposing coaches, players, and fans,” Hastings said. It’s also good practice to avoid announcing the distance on a Leopard’s’’s 3rd and long. It doesn’t make the coaches happy. Unfortunately, I’ve made many mistakes announcing over the years. Players have a wide variety of first and last names.”

Hastings’s long personal history with football was vital in getting him the job.

“I played football from the third grade all the way until my senior year,” Hastings said. “I have enjoyed football all my life.”

Paul Berger, one of Hastings’ spotters, has been calling games with Ian for five years, and said he believes Ian is doing a good job of keeping it entertaining.

“Ian has fun doing the announcing,” Berger said. “He enjoys making the announcements, and he tries to get the crowd pumped as well. That is actually an important part of the announcer’s job- to keep the crowd involved and make sure they are making noise when they should. He can also laugh at himself if he makes an announcement wrong or mispronounces the name of a player or the school.”

Berger’s job is to keep Hastings informed and help him stay accurate.

““On a typical play, the announcer will broadcast the result of the play, who carried or threw the ball, who made the tackle, and then set up the next play,” Berger said. “It is impossible to memorize the rosters of both teams, so there will be three spotters in the booth, one to watch offensive players, one to watch defensive players, and one to announce the next play. Once a play is over, all three of the spotters call out the result of the play and Ian listens to all of the input to make a clear announcement before the next play starts.”

Berger also stays entertained by the inevitable mistakes Hastings runs into while playcalling.

“There have been multiple occasions where Ian will inadvertently announce the name of an older brother who played years ago,” Berger said. “This produces a quizzical look from the family in the stands. The family is not hesitant to look up at the press box with a disgruntled look on their face. All players like to hear their name announced, so when it is wrong, Ian gets a few looks.”

In his eight years, Hastings has seen plenty of breathtaking moments by the football team, but one stands out in particular.

“My favorite moment from broadcasting is going undefeated a couple of years ago,” Hastings said. “There were so many amazing games, and there was unbelievable heart shown by every member of the team.”