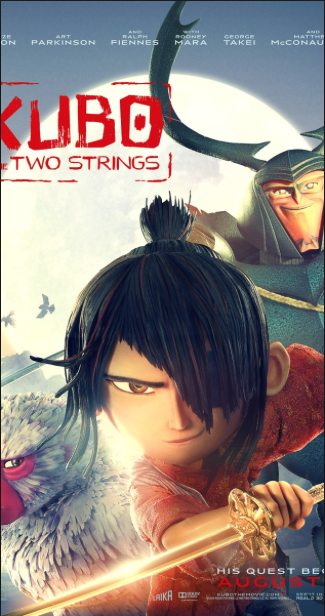 A film like “Kubo and The Two Strings,” especially in the context of the weak summer 2016 movie season, can be appreciated instantly for how much of a rarity it is. A genuinely good, non-Pixar animated film coming out in the middle of August almost never happens.

The first thing to take note of about “Kubo” is how stunningly gorgeous the animation is. Like other films produced by Laika Studios, the use of stop motion is incredibly tasteful, and makes it stand out from other 3D animated features in a good way. The colors used throughout match the general melancholy mood of the film, and the character design is creative and feels fresh. If you stick around for the end credits (and you should), you can see the amount of love and effort put into building the world of the film.

The other aspect that distinguishes “Kubo” from other summer fare is the message. This summer, we’ve seen depraved, violent movies such as “Suicide Squad” that fail to connect with the audience due to their message, or lack thereof. Unlike those films, Kubo offers a surprisingly profound statement on mortality and coping with loss. It’s a heavy subject for a children’s film to be talking about, but it balances it out with a good amount of humor and action.

The movie opens with nearly 10 minutes of silence, aside from the score, allowing the absolutely beautiful visuals to take the forefront. After this, we are introduced to our protagonist: a young, one-eyed boy named Kubo, who is sent on a quest for a legendary set of armor by his mother. Guided by two aptly named assistants, Monkey and Beetle, he finds himself on a perilous quest through strange lands.

The weakness in Kubo lies in its storytelling, which is disjointed and clunky at points, especially midway through the film, where most of the action takes place. During this portion, the main message of the film gets lost, instead relying on humor mostly delivered by the Matthew McConaughey-voiced Beetle, and in mostly cliche-ridden dialogue. The ending also feels rushed and too quick, as if the filmmakers had to fit their movie into a certain timeframe without allowing it to fully develop to its potential.

Despite its faults, “Kubo and The Two Strings” ultimately succeeds for its distinctive, unparalleled animation and ability to deliver a film with integrity and a real message behind it without pandering to its audience. Laika Studios have been putting out quality animated features for almost a decade now and “Kubo and The Two Strings” continues their streak of these daring, smart films.