Band debuts their 2016 show "The Ascent" 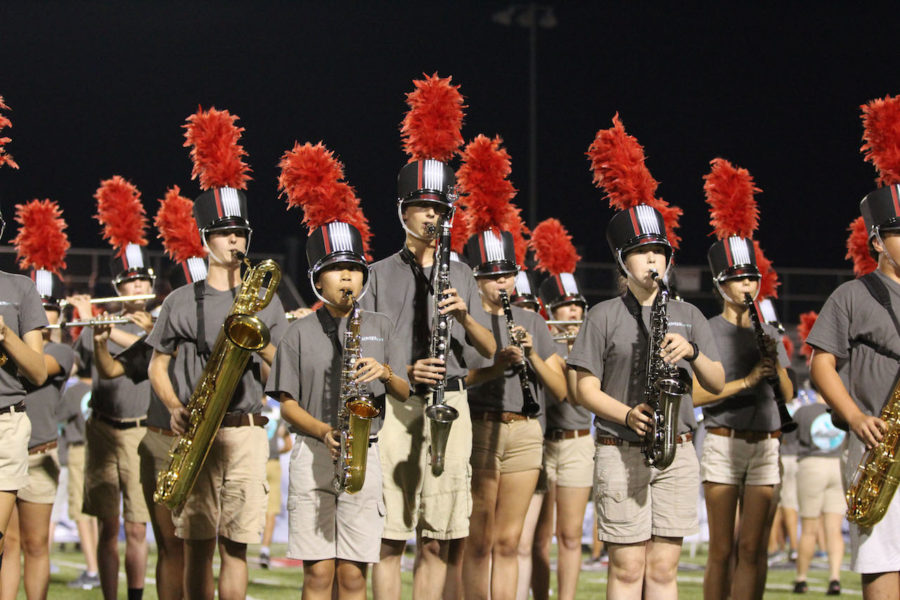 On Everest, the temperature is below zero, the wind races by at high speeds, snow falls in mass amounts, and the ground is covered in ice. While this environment is significantly different from that of a football field, the marching band is working to recreate a mountaintop experience every Friday night for this year’s show, “The Ascent.”

“It is based on music and uses images that conjure up the feelings of an Everest-type climbing expedition,” band director Paul Heuer said.

“To me, it means taking everything we accomplished last year and building on it to make something even more special than last year,” Turner said.

Every year the marching band chooses a new theme for its performance.

“We took a long time, starting in November, last school year coming up with ideas and music that could go with the ideas,” Heuer said. “After batting around many ideas, we settled on this and got started with having music arranged and drill written. Our show last year was called ‘Chasing Shadows.’ We use a similar format, but the music and story of the show is very different.”

Both “Chasing Shadows” and “The Ascent” were well-liked by junior piccolo player Jensen Kinnebrew, but she also feels that the two are vastly different.

“The themes from this year and last year are completely different,” Kinnebrew said. “They still tell stories, but the concept is not similar in the slightest. ‘The Ascent’ is the musical and physical representation of climbing a mountain and various events occurring on that journey. In ‘Chasing Shadows,’ the band was split into two. Woodwinds were the shadows, the brass were the people. And in the beginning, the shadows escaped, and there was a chase to get them back.”

Heuer has high hopes for the upcoming year with “The Ascent.”

“The entire marching band is playing this show at contests and football games all season,” Heuer said. “Our goal at all of our contests is to be in the top percentage and make finals for a second performance in the evenings of the contests. The marching band is the most visible part of our program and includes every single member of the program, so the success we have is owned by all of the [marching band] students.”

Turner is aware of the challenges in “The Ascent,” but said the students can overcome them. She added that the increase in the band’s size has created additional opportunities and challenges.

“With that comes more options for visual effects, but also means there are a lot of people to teach how to do marching band,” Turner said. “The challenge is having a band that has more underclassman than upperclassman since upperclassman have more experience with music as well as with marching. To ascend above this challenge, we used time during the summer to work with professional musicians and help the freshmen become acclimated to high school band.”

Although this show is new for everyone, Heuer is confident in the abilities of the band to perform it.

“The show is tricky to learn and perform,” Heuer said. “It is much more advanced for our freshmen that are new to high school band than what they have done in middle school band. They are doing great with it, and every day is getting better on some very difficult music.”