Leopards to take on 6th-ranked Rangers at The Star 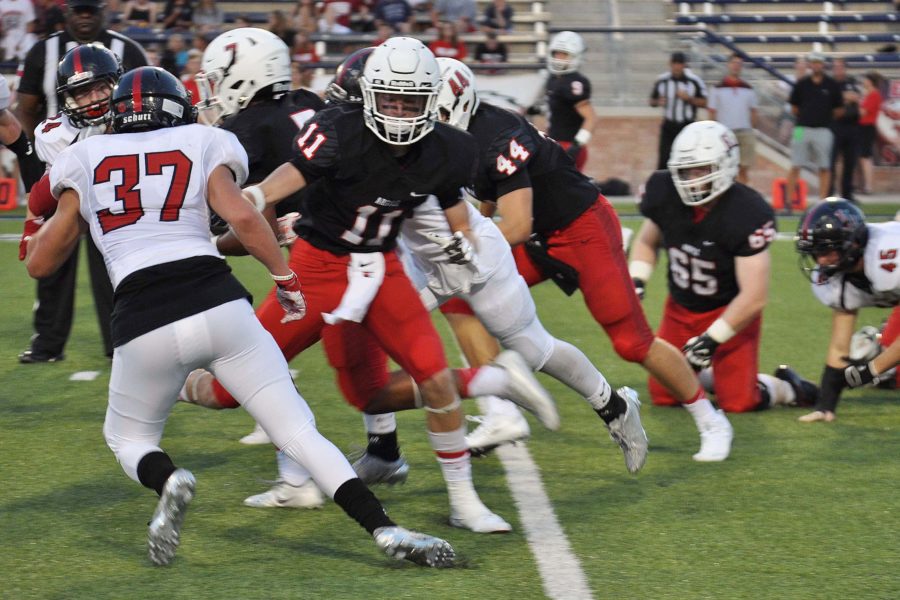 The football team (1-1) faces Frisco Lone Star (2-0) tonight at The Ford Center at The Star at 7 p.m., and are preparing to do what senior defensive back Matthew Almy called “cutting the head off the snake.”

The snake is the #6 Class 5A team in the state, according to the Associated Press. The head is senior Jason Shelley (6-0, 178), a dual-threat quarterback who has already committed to Utah. Shelley has thrown for 626 yards and three touchdowns, along with two rushing touchdowns, in the first two games this season.

“Defensively this week we definitely have to contain the quarterback,” sophomore defensive back Chase Coronado said. “He’s a D1 guy who can run the ball as well, so that’s definitely priority number one. If we can limit explosive plays we should end this game with a win.”

Shelley’s main passing target, Jaylen Dixon, who has 178 yards receiving and two touchdowns on the season, also presents a challenge for the defense.

The team respects and knows Lone Star poses a big threat this week, and is looking to improve upon the progress made between weeks one and two both on and off the field. After sophomore quarterback Carson Collins threw for 198 yards and a touchdown, the coaching staff is working to keep him playing in top form.

“We want to keep him protected and give him enough time to make good decisions,” offensive line coach Dustin Gunter said. “He’s brand new to varsity, and it’s key that he is able to have time to make the right reads on the plays to lead the offense. If the line can do that, he can continue to be just as successful.

After the 21-14 win against Wakeland last week, senior receiver Steven Prudhomme said the team wants to carry the momentum carry to the coming game. Coronado added that maintaining the intensity on defense from the Wakeland game is key to winning this week, and Almy agreed.

“Our defense specifically showed up the whole game,” Almy said. “Our defense gave up zero points through the first three quarters, and that’s the best way for us to win games. We have a new quarterback, and if we play well and get stops on defense, it will give [Collins] the confidence to play well.”

Prudhomme also said he’s hopeful that his teammates can bring the energy from last week’s home win with them the road.

“This year’s team is one of the teams I have enjoyed playing on the most, because we can play hard and still have fun doing it,” Prudhomme said.