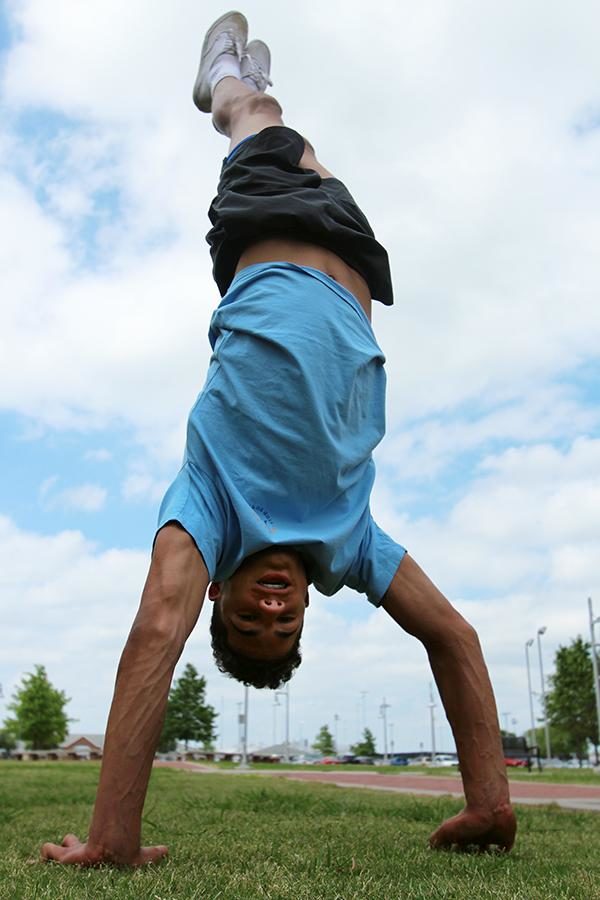 Freshman Tyler Van Wagoner is a level 8 gymnast and plans to advance to level 10 next year.

Even though the school doesn’t have a gymnastics team, that hasn’t stopped freshman athlete Tyler Van Wagoner’s passion for the sport.

“[I have been doing gymnastics] ever since I was about 6,” Tyler said. “So you start out with an evaluation and [they noticed] that I was a natural.”

Over his years of doing gymnastics, Tyler has quickly climbed the ranks in skill and level.

“I was only in preteen [level] for about 2 to 3 years then I moved onto the actual men’s team which is level five through ten,” Tyler said. “I had been a level 5 for two years and then had to progress my skills and technique to become a level 6. I was a level 6 for two years as well, making regionals each year. Regionals is the biggest meet I have which is between 7-10 states. After being a level 6 for 2 years, I moved on to level 8. I am now on my second season (year) of being an 8 and am going to level 10 next year because of my age and skill. Level 10 is the most you can go, then you go to elite which is Olympics.”

When Tyler first began his gymnastics career, his parents didn’t know what to expect.

“Because we were not familiar with men’s gymnastics, initially we had a great deal to learn as parents of an athlete new to the sport,” Tyler’s mother, Inga Van Wagoner, said. “There was a completely new vocabulary to understand, levels and age brackets to recognize, and so many skills to recognize and be able to pronounce.”

While it is a great time commitment, Inga strongly supports her son’s sport.

“Like any parent, we were repeatedly thrilled to see Tyler master a new skill, advance to higher and more demanding levels, and do increasingly well in competition,” Inga said. “More specifically, it has been a blessing to see Tyler mature through his training to overcome challenges, be a respectful competitor and teammate, and to congratulate other winners with grace and remember to be a humble winner. The wins are always great, but the self-discipline he has developed is a true reward that will be with him his whole life.”

Although Tyler said gymnastics is fun, it can take up a lot of time.

Tyler’s mother said she worries about him and insists that “athletes have to know their limits.”

“[For Tyler, I worry about] injuries and burnout,” Inga said. “Athletes have to know their limits—physically and personally—and when it’s okay to push those limits and when it isn’t. For Tyler, we pay close attention to significant pains or injuries due to high impact and repetition. We use various therapies like cryo and sport-oriented muscle massage and visit top sports physicians when needed.”

Spending so much time doing the sport he loves, Tyler must also factor in school and a social life into his daily routine.

“We help Tyler maintain a healthy balance between training and school, too,” Inga said. “It is important to have ‘downtime’ and be able to just hang out with friends. Tyler makes time to participate in other sports, his church group and volunteer in the community as well. We want to be sure Tyler has a well-rounded outlook and continues to enjoy the sport.”

Tyler’s coach, Greg Schram, described him as an “all-around gymnast.”

“[Tyler’s biggest strength is] floor & vault mostly,” Schram said. “However, he has shown to be an all-around gymnast. [As for this work ethic], like others, he has ups and downs, and it also depends on the time of year, the event, and the skills. He has physical/mental strengths in some areas that make it easier, and he has weaknesses that make things more challenging.”

Despite many imagined stereotypes of men’s gymnastics, Tyler only receives positive questions about the sport he loves.

“Gymnastics was proven to be the hardest sport in the world by a scientist,” Tyler said. “And we get asked a lot if we can do the splits or backflip, or if we’re going to the Olympics.”