Softball team in third place heading into second half of district 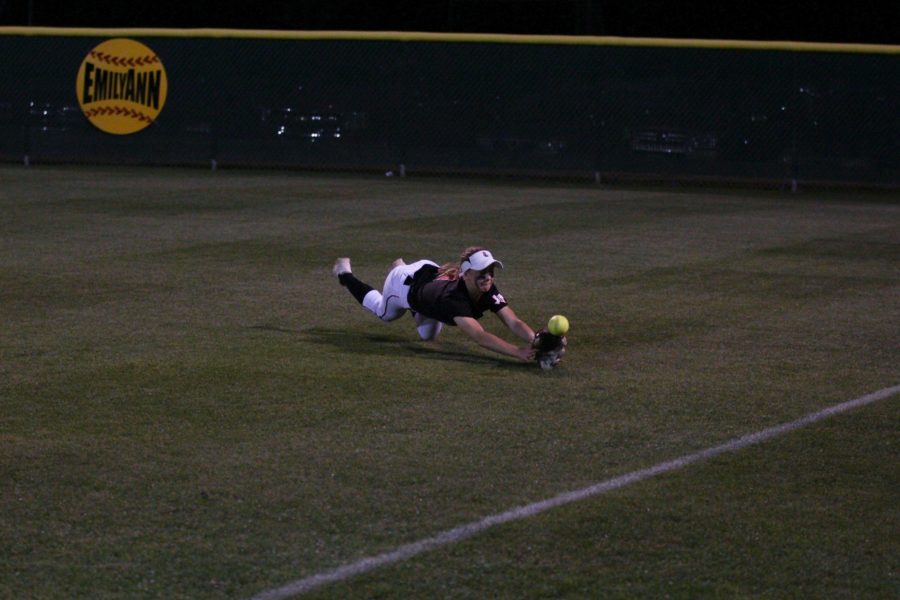 With a win over the McKinney Lions on Tuesday, the softball team has crossed the midpoint of district play and, despite lingering injuries, team morale is still high as the team hopes to cruise through the next seven games and onto playoffs. The girls currently sit at third place and hope to improve on their 5-2 record with an away game against Denison today at 7 p.m.

“Denison has a good little pitcher that will be a tough challenge for us tonight as she held us to five runs last game,” head coach Jeff Roberts said. “We won the last game against them and hopefully we will be successful again tonight. We will probably have two players out tonight and possibly more, so the people that are playing have to really step up and do their job.”

While Roberts said he was happy with the team’s 12-1 win against McKinney, especially with what he described as the best pitching he has seen out of freshman Mattie Boyd and a huge game out of Kylie Ramos, the coach added that the 8-3 loss to the undefeated Wylie Pirates last Friday was rather disappointing as the team was unable to keep up the attack throughout the game.

“The game against Wylie did not go as well as we had hoped,” Roberts said. “We scored first and Emily Weichel did a great job of running the bases, but to put it simply we didn’t finish. We were missing Jaclyn Willis and we had a few more that were not at 100 percent, but we’ve had that problem the whole season.”

As what Roberts has previously called his most injury-plagued season continues, senior Jaclyn Willis and junior Kallie Killingsworth are currently both sidelined with injuries. Willis said problems from her first surgery to heal her broken leg have caused pains that led to her being unable to play.

“I was having a really bad pain in my leg that was caused by one of the screws in my knee from a previous surgery,” Willis said. “I could only go about 85 percent, so I decided that I needed to have another surgery in order to fix this in time for playoffs and college ball. I go back to the doctor for the post operation and to get my stitches taken out on April 6th, which I will hopefully be told that I’ll be out for two weeks max, although it all depends on how quickly the bone fills in.”

Killingworth has said that her injury began as a simple sprain, but has unfortunately grown into a serious problem due to continued use. She was supposed to return for tonight’s game against Denison, though Killingsworth said her doctor didn’t see that happening and she will be in a boot for at least one to two weeks.

“I sprained my ankle pretty badly when I got hit by a pitch against Wylie East,” Killingsworth said. “I continued to play and practice on it which created an extreme hematoma that has made the sprain worse due to swelling, bruising, and the pressure. Kim Lyne filled in for me in right field on Tuesday against McKinney though I’m not sure who will fill in tonight for me.”

As the team reaches the halfway point of the season, junior captain JoJo McRae says they are still as excited as they were at the start of the season to get to playoffs. By keeping with their mantra of “225 RELOAD,” she said the team is keeping its ambition of getting to the state tournament.

“We really haven’t had any struggle with being motivated about games and playoffs,” McRae said. “As we play the district teams again, we have to keep never giving in during games so we can keep our playoff spot and maybe even get ahead on the standings. Our focus is still on playing with a lot of heart and always fighting back so that should be no problem.”