Texas Secretary of State visits to speak on voting importance 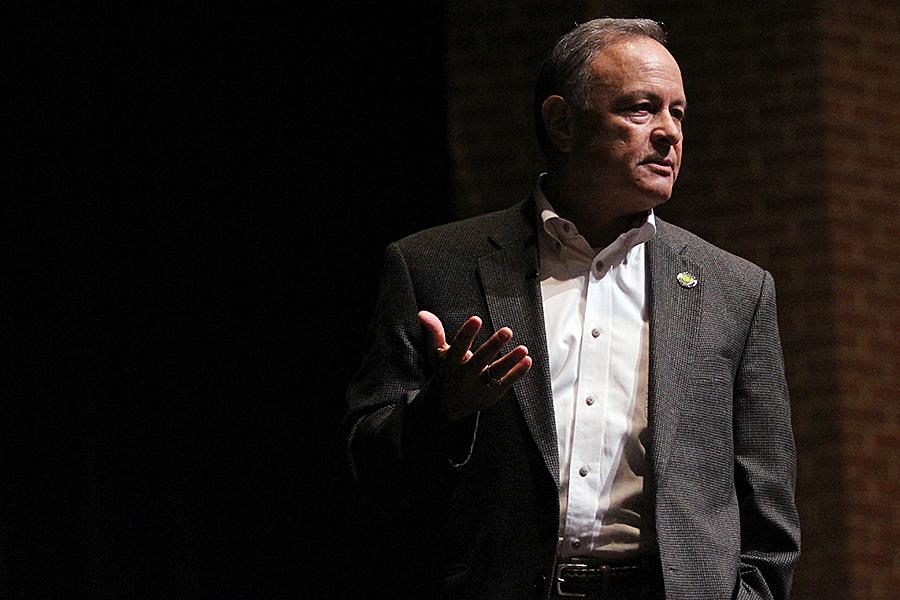 Texas Secretary of State Carlos Cascos speaks to students on the importance of voting during an assembly in the auditorium on Tuesday, March 29.

Texas Secretary of State Carlos Cascos made a special appearance at the high school on Tuesday, March 29, to speak to students about the importance of participating in elections.

Cascos travels to all parts of Texas to present to students in hopes of persuading them to vote in the elections. He addressed the students in two assemblies held in the auditorium, speaking first to juniors and seniors, and then to freshmen and sophomores.

“What better audience can I have than going to high schools,” Cascos said. “You have a captive audience. If you can get to ten percent of the students that you talk to then it’s mission accomplished.”

His presentation convinced many students of the importance of participating in the political process.

“Before I didn’t know the purpose of voting or why I should vote,” sophomore Savanna Roulette said. “Now I do and so now I am going to register and vote when I get older.”

Cascos chooses to travel to schools across the country because of the decreasing involvement of young Americans.

“I see the fact that we have a generational gap,” Cascos said. “I see a lot of young potential voters that are not voting.”

He said parents who do not vote influence their children to do the same.

“If you see your parents going to vote in every election, it’s gonna create that voting ethic within you,” Cascos said. “If you never see your parent voting, but you read about them, you hear about them, in school they talk about them, and yet your parents never go, there’s a strong likelihood that you’re gonna believe it’s not important, so consequently you don’t go vote.”

Instead of preplanning and reading his points, Cascos says he feels that it’s important to “speak from the heart” and personalize his message to his audience.

Cascos said it was important not to read a speech, so that his message seems real and captivates those who hear him speak.

“I know I can trust him and I can fully listen and develop my information with him because he is the Secretary of State,” Burno said. “He is a reliable source and I can trust the information, so if he tells me I should vote, I think that he is someone I should listen to because of his past experiences.”

Despite the small size of the community, Cascos chose to speak and convince students of their importance in the democratic process.

“I was speaking at an event, probably in Austin, and one of the comments I made was what I wanted to do in terms of reaching out to young voters, first-time voters, high school students, college campuses, and I also said there was no community too small for me not to visit, so here I am,” Cascos said. “They called and I came.”