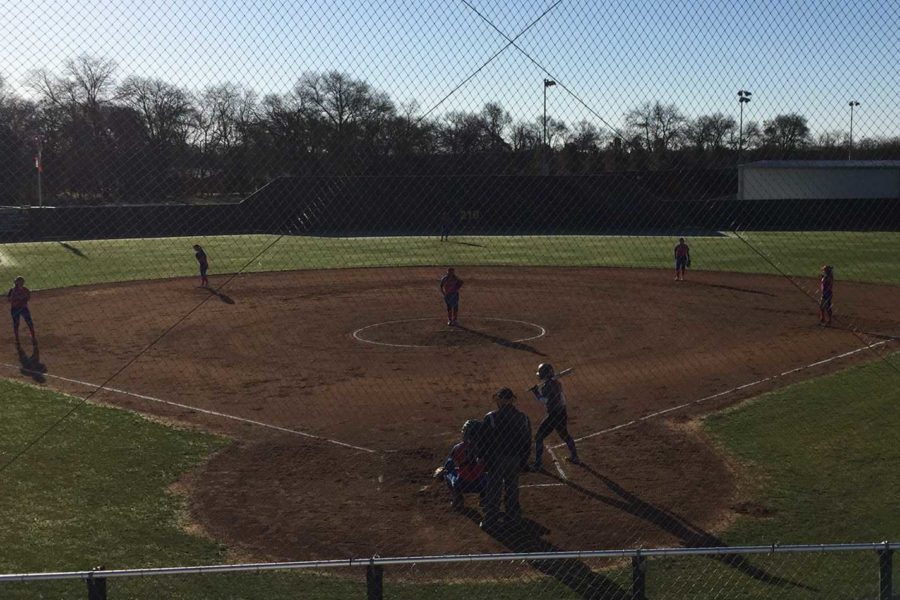 After a tournament in College Station, the varsity softball team will be competing in a tournament on Friday.

A month of practices and scrimmages into the season, the softball team has set its sights on being in top form for their district opponents.

“We’ve only had one tournament so far where we played in College Station and it went pretty well,” head coach Jeff Roberts said. “District begins around the second week of March, but right now our focus is on the games in Mesquite this week and one in McKinney next week where we hope to continue our successes. Practices are going well, our JV players are learning what it means to play at a high school level as we have a lot of girls new to the program. From a varsity standpoint, we returned about eight starters who know what is expected in this program.”

Softball began the season in a rough patch as the team was missing two pieces of their starting lineup. Freshman pitcher Mattie Boyd has been unable to practice due to injury though is expected to return before district play, and senior captain Jaclyn Willis suffered a broken leg sliding home at a tournament last July and is still being rehabilitated.

“The recovery process has definitely been long as I’m not really at full speed yet, but right now I’m just focusing on getting back to where I was without pushing myself too hard,” Willis said. “Some days are worse than others, and we are trying to figure out how much of the pain is from the injury that is healing or if I will have the pain for the rest of my life.  A few other people have been injured, but everybody is doing their part. The freshmen have stepped up in a lot of different spots and there’s also been many varsity returners who are playing in places they’re not used to.”

Despite missing a few players, Roberts said the girls are staying concentrated, especially on getting as many runners to home plate as the team was 23-1 last year when they scored at least five runs. Along with scoring as much as possible, the team has developed a motto called “225 Reload” created to motivate them toward a state title.

“225 is basically our ultimate goal, and 225 is how many miles the state game in Austin is from Lovejoy High School,” junior captain JoJo McRae said. “Our program is known for having a very good season, and then having to rebuild the next year or having a down year. So that’s where the reload comes into place, since last season was very successful, ending up fifth in the state, and we want to keep it going.”

While a 225-mile road trip is still a few months away, junior captain Emily Weichel said the team is slowly becoming a family with each practice and tournament, something she said is very important to their success.

“After our out of town trip to college station everyone got to know each other better and the trip helped us to connect more, especially with group bonding games and being around each other more often,” Weichel said. “It took us a little bit to figure out our roles and leadership because there are less seniors than last year for sure, but once games started our chemistry improved. Since we do have a new team, it’s been a process getting everyone on the same page, but our desire to win and willingness to do what it takes makes us really strong.”

Roberts said he agreed with his with players that they’re at their strongest when they play with synergy and not as individuals with large egos. While the team is making sure to fit in family bonding time into the practice schedule, Roberts said they are looking forward to their district competition this season.

“Wylie finished second last year, and they are probably the best challenge again,” Roberts said. “Their starting pitcher is out though as she had surgery in November and so that could hurt them a little bit with having to play their backup pitchers. McKinney North has plenty of good sticks, but they graduated their senior pitcher and will probably be throwing a freshman pitcher which at times can be tough, especially when you don’t have a freshman like we have in Mattie Boyd who’s already committed to Oklahoma State University. Prosper will be a threat as they have some good sticks and probably one of the best catchers in the district who committed to A&M as a freshman.”

Softball plays its first district game March 8 against Denison High School at home. The squad is playing at a tournament in Mesquite this weekend against Alvarado, Mt. Pleasant, and Burleson, with a tournament in McKinney next week against Denton Guyer, Forney, and Celina.