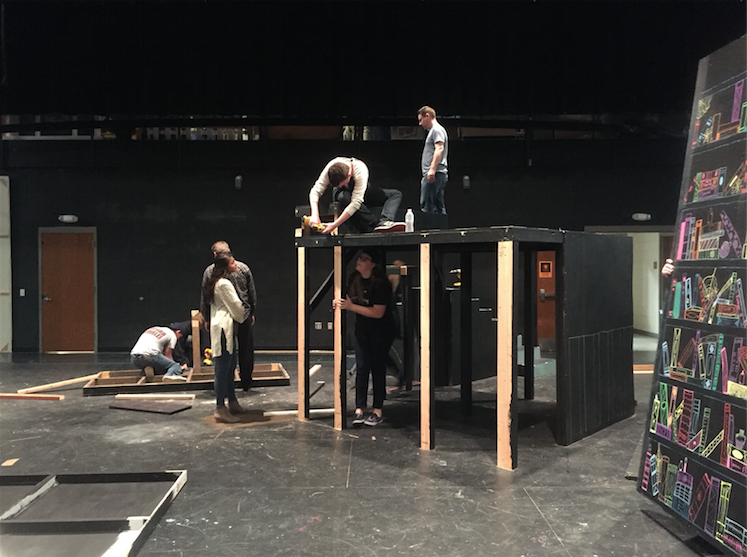 Students spent 3 weeks constructing the set for The Book of Everything, this year's production show. However, within an hour of the closing of the show, the set had been completely torn down and put away, a process called striking.

The lights fade, the stage is cleared, and the once-crowded auditorium becomes vacant. The theater program has just finished performing yet another production, bringing the night to what most people think an end. However, the work behind the scenes is far from over. It’s time to break down the set- or ‘strike.’

“The process of [striking] varies from show to show,” theatre teacher John Davenport said. “The idea is to [strike] in reverse order. Therefore you must always build your structural set pieces first and then you want to take down those same structural pieces last.”

Both cast and crew work ruthlessly to break down the set, all coming together to achieve a similar goal.

“Everyone has a job,” senior Jenna Rupich said. “The prop people take the props and put them away, the set crew take the furniture and start disassembling the set, [for example] the flats and the braces will be removed, and basically anything that was built will be torn apart and put back in it’s place.”

Though the process is tedious, those involved in productions must participate in striking the set after every final show.

“There’s a lot of emotions after a show is over,” senior Ian Raybon said. “Some people are sad the show’s come to an end whilst others just want to get work done so they can go to the cast party.”

Each piece has a specific location, something the technicians as well as actors must remember when disassembling.

“The flats go upstairs [in the prop loft], the wood pieces and braces go in the shop, furniture and props go upstairs as well, chairs get tied up, any special lights that we [incorporated into the show] will be taken down and put back in the coves, and monitors and mics go back to the booth,” Rupich said.

The theater program produces four productions throughout the year; the fall show, Production class’ show, musical, and one act competition.

“When it’s all done and over we get to see an empty stage, ready for the next show and that’s exciting,” Rupich said.

Some view this process as closure for a show, but others see it as just another step in the production of a play.

“My favorite part of striking is seeing a wonderful piece of art that you’ve been working on for weeks at a time come apart in about thirty minutes,” Raybon said.