Breakfast before the Friday night lights 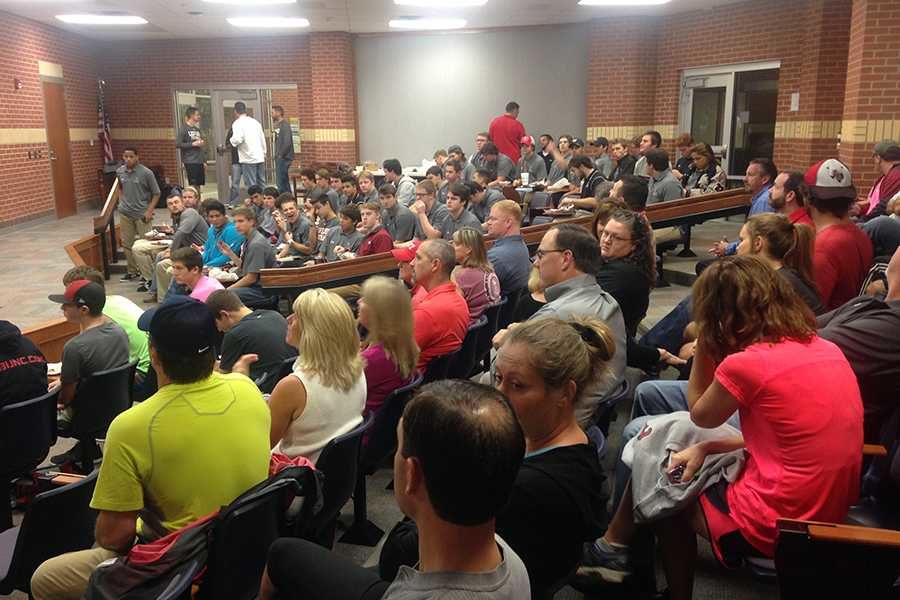 Before they hit the Friday night lights, the football players and their parents gather for breakfast to prepare for the upcoming game.

The life of a student football player. Early morning practice as the sun rises. Quick breakfast of anything available. Lectures, notetaking, worksheets, projects to do. Lunch with friends and solace from work. More lectures, more notetaking, more worksheets, more projects to do. A race home to the couch or bed to sleep and forget about responsibilities.

The routine of a student football player is similar to any student athlete or student with extracurricular activities. Students are subject to large amounts of work, stress, and activity that it seems that sleep and the weekend are the only motivation to complete the day. But how does a student stay true to his morals and faith in such a rigorous routine?

The varsity football team has realized the importance of this question and found a solution. Before the turbulent day that Friday often comes to be, the varsity football team, their parents, and the coaches all convene in the lecture hall Friday morning for a little family meeting known as Breakfast With Champions.

The sun still hasn’t broken the dark sky as players and their parents head into the high school. As they enter the lecture hall, Coach Ryan Cox is setting up the computer and projector while breakfast is being served. Parents greet each other and take their traditional spots, chatting with each other about the week. Players sit down on the opposite side of the parents, eating an assortment of fast food as part of their wakeup process. The room begins to settle down as Cox calls the attention of the room.

He begins with some pleasantries and jokes about the weather, but it’s obvious football is the center of conversation in the room. A few JV players are honored for their performance during practice, receiving an equal amount of praise and heckling from the coaches. A video of the highlights of previous week’s game follows along with a preview of the current week’s opposition. Cox begins to talk about the game ahead along with information for the parents about the rain delays. He then begins a story about the last night.

The JV game had been cancelled due to rain and he was worrying about the varsity game. Coach Cox paced his house late at night as thunder boomed outside until his wife had to calm him down, assuring him the weather was not in his control no matter how many times he walked back and forth. Cox proceeds to imparts his wife’s wisdom on the rest of the family gathered in the lecture hall. The players are only slightly awake now, but Cox can still tell they are ready to play whenever, wherever. As Cox’s speech finishes, the parents begin to exit the hall and hug their children/players goodbye.

Once the parents exit, a different coach takes the stage and begins to set up his presentation. Chad Krisher gives his praises to the varsity team for their performance the past week and gives Starbursts to players for different actions they made during the game. These rewards weren’t for a key tackle or catch, but for when a player showed respect to the officials or other team by handing them the ball after the play or helping a player up.

The topic of his speech on this day is one of the characteristics of a mentally tough person. Krisher tells the players to never complain or whine as it accomplishes nothing. He recites verses and Psalms from the Bible as well as a motivational video on the topic. After Krisher is done, he leads a prayer and wishes the varsity team the best in the game tonight.

Breakfast With Champions may seem as an odd activity for a football team to do on game day. They could be running through more plays, stretching, or watching film to prepare for the night ahead. So why does the football team spend its crucial time in the lecture hall?

“I feel it is nice to get all of the guys and their parents together on the morning of game days because we all play a role on the football team,” Cox said. “Obviously the player and coaches do, but the parents have an often unappreciated role. This allow us to show them our gratitude. It is also a time for any former player, relatives from out of town, or even administration and teachers to connect with the team. As for using that time to watch more film or run more plays, we actually have do that later in the day which is why we have BWC so early in the morning.”

Krisher has been conducting these services for over two years with the team, providing his moral wisdom as well as the Bible’s every Friday morning through playoffs.

“After the parents leave, we have a voluntary service for the team to help them morally,” Krisher said. “We change our service each week. This year we have been following the seven characteristics of a mentally tough player. Each week we focus on a specific characteristic.”

Varsity football team members said they enjoy the service by Krisher as it helps them in ways unexpected from a football program.

“I think routine is very important to being successful which is why I like BWC,” sophomore Bumper Pool said. “It is something small, but to me it is mentally getting prepared and starting the day off right with food, which is good physical preparation.”

The next Breakfast With Champions will be Friday, Nov. 6, as the varsity football team and family prepare to close the regular season on the road against McKinney.